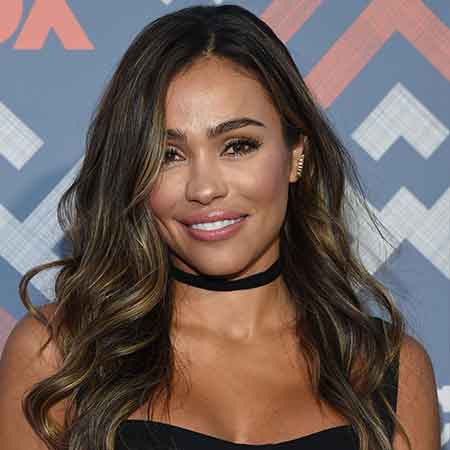 An American Television host, October Gonzalez got her share of the limelight after appearing in the Fox game show series called Beat Shazam. She also co-hosted the Television talk show, Rachael Ray. Gonzalez is, however, best known for being the wife of former NFL player, Tony Gonzalez.

Born in Los Angeles, October Gonzalez Grew Up Along With Four Siblings

As per Wikipedia, October Gonzalez was born in October Calinda Vegas-Russell on October 10, 1980, under the birth sign Libra in Los Angeles, California. She holds American nationality and ethnicity wise, she has a mixed ethnical background.

Talking about her parents, though the information of her mother is not revealed, her father is Pat Vegas who was one of the members of the 70s popular band Redbone. Likewise, her grandmother was a singer and her grandfather was a pianist.

Gonzales spent most of her early days growing up in her hometown Los Angeles with her three sisters and one brother. She also did her schooling from there.

October Gonzalez is an American television show host who has hosted few popular game shows. She appeared as a co-host in the Television talk show, Rachael Ray and starred in the Fox game show series called Beat Shazam as a DJ. The show is hosted by actor and comedian Jamie Foxx. Besides she was cast in an episode of E! True Hollywood Story about football wives in 2009.

She appeared on the red carpet event of the premiere of the movie, The Book of Love that featured Jason Sudeikis, Jessica Biel, and Maisie Williams.

The host October Gonzalez's net worth is not estimated as of yet. Her main source of earning is her career as a Television show host. She also makes good earning for the endorsement of different brad in her social media platform where she has thousands of followers. As per Influencer Marketing Hub, she gets paid around $147.75 to $246.26 per post.

On the other hand, Gonzalez's husband Tony is a former NFL player who has a net worth of $20 million and $30 million according to Celebrity Net Worth and The Richest respectively.

Previously they use to resid in Huntington Beach mansion which was sold in 2015 by Tony for $6.3 million. The house which was made in  6,000 sq.ft featured 5.5 bathrooms, 5 bedrooms, a theater room, a pool, and many other things.

Married To Tony Gonzalez After Several Years Of Dating Relationship

October Gonzalez is married to her boyfriend, a former NFL player Tony Gonzalez and they tied the knot on July 2007. The couple first met while the former was working at a bar in Newport Beach. The pair has two children together, a daughter named Malia Gonzalez and a son named River Gonzalez. She is the stepmother to her husband's son Nikko Gonzalez from his past relationship.

CAPTION: October Gonzalez with her husband Tony Gonzalez and their kids SOURCE: Instagram

Before exchanging vows with the actor she was dating an unknown person and after her split, started dating Tony. The husband & wife duo is found collaborating with the PETA Foundation and did a photoshoot naked to term their belief "We'd Rather Go Naked Than Wear Fur". They strongly addressed the ruthless behavior the animals have to face to pull the fur off their body to make clothes for humans.

October currently resides in Los Angeles, California along with his wife and children. She often shares beautiful snaps about her family on her social media.

Gonzalez is pretty active on her social media sites and has around 30k and 7.8k followers on Instagram and Twitter respectively. as of October 2019.

Height, Age, and Other Facts