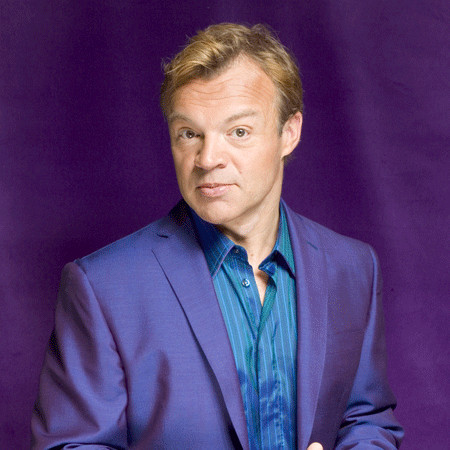 Graham William Walker popular as Graham Norton is an Irish television and radio presenter. He is also a comedian, actor, and writer based in the United Kingdom who has won BAFTA TV Award five times for his comedy show The Graham Norton Show.

Graham Norton was born Graham William Walker (Norton being his stage name) on 4th April 1963 in Clondalkin, a suburb of Dublin. He spent most of his childhood days in Bandon, County Cork, Ireland raised by a family of Protestant. He holds an Irish nationality.

He then moved to the United Kingdom and joined the Central School of Speech and Drama in order to hone his inbuilt talents.

Norton made his first appearances in broadcasting while in the United Kingdom as a regular comedian and panelist at the BBC Radio 4 show Loose Ends, in the 1990s. His audience had an instant liking towards him.

Norton then came into the limelight when he worked with Channel 5. He subsequently won an award for being the stand-in host of a late-night TV talk show.

Norton then moved to Channel 4 where he began hosting his own chat shows titled So Graham Norton and V Graham Norton. This was when Graham revealed that he was gay.  He had nearly conquered the comedic arena of United Kingdom and then began a quest to do the same in America.

Norton went on to host the BBC One series How Do You Solve A Problem Like Maria? On 22nd February 2007, Norton's new chat show, The Graham Norton Show, aired on BBC Two. By December 2011, the panel show, Would You Rather...? with Graham Norton had premiered on BBC America.

He also went on to present a Saturday morning show on BBC Radio 2, featuring guest interviews and music.  Norton has also proved himself as an actor with his character Mr. Puckov in the 2006 American comedy spoof film Another Gay Movie.

Also in 2007, Norton played the character Taylor in the romantic comedy film, I Could Never Be Your Woman.

Graham Norton's Net Worth And Salary

His second memoir titled The Life and Loves of a He-Devil won the 2014 Irish Book Award in the Non-Fiction Book of the Year.

Norton is openly gay. He began dating fashion consultant Trevor Patterson in 2010. Norton is 20 years older than Trevor. The couple separated shortly in 2013. Trevor later spoke of Norton as a pet lover and heavy drinker. Graham has not married till date and does not have any children.

Norton is currently an advice column writer for The Daily Telegraph newspaper. Norton broke the Guinness World Record on March 7th, 2014 for 'The Most Questions Asked on a TV Chat Show' on Comic Relief's Big Chat.