How Much is Neymar Jr.'s Net worth? Details About his Salary, Cars, Homes and transfer to PSG 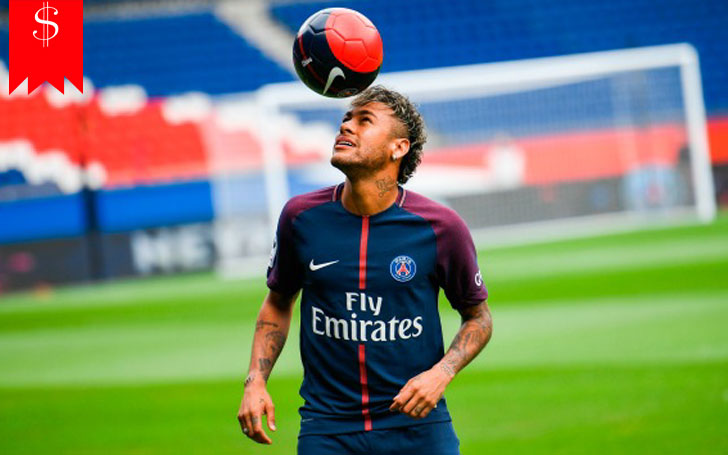 The Brazilian Wonder kid Neymar Jr is indeed one of the most talented and skilled players in the history of football. And now his recent transfer contract deal with the French Giant Paris Saint-German has made him the most valued player ever in FIFA.

His enchanting performance in the 2014 FIFA World Cup made him the target for most of the world's best clubs, all the best clubs in the world wanted to sign him.

The 25-year-old football star has a massive net worth as he is one of the highest earning footballers/soccer players in the world. We are discussing all things money related to Neymar Jr.

How much is Neymar Jr's Net worth in 2017? Salary and Income Sources

Neymar Jr's net worth in 2017 is  $90 million of net worth. He became the most expensive soccer player after his recent $500 million worth 5 years contract with Paris Saint-Greman.

Neymar's current salary as per the 5 years contract is fixed at a $350 million, facilitated with bonus before-tax which means he will receive $70 million annually. According to Forbes, Neymar's joint earning in 2017 off the pitch is estimated to be $37 million. His annual average earning is estimated to be $10 million per year.

The 25-year old is the only soccer player to earn more off than on the pitch, Neymar is linked to various global endorsing brands including Nike, Panasonic, Gillet, Beats by. Dr. Dre, Sony. He makes a stunning £18million  from his various sponsorship deals every year His deal with Nike is worth £88million for 11-year bringing him around $9 million per year.

With a lot of money comes the responsibility of spending it as well. And Neymar likes spending his money on cars! Let's take a look at his car collections!

Neymar's collection of cars is as impressive as it can get, he owns most of the world's best luxury cars. Some of his cars are listed below along with their prices.

Neymar doesn't only have luxury cars, his homes are extravagant as well. When you have a net worth of $90 million, you'd definitely live in mansions all over the world, right?

Neymar Jr. has a mansion at Sau Paulo and also an apartment in Bayside Towers Club Residence Itapema. As the star has just moved to Paris, he's most probably getting a new home there too.

Former FC Barcelona player Neymar Jr. now plays for the French club Paris Saint-German and of course for his country Brazil. Neymar came into fame at an early age of 17 representing Santos FC in the Brazillian league.

Neymar celebrating with his trophies

He made his first professional debut on  7 March 2009. On 24 May 2013, Santos declared that they had received two offers for Neymar and the same day(27 May 2013 ), Neymar announced he would sign with Barcelona. You may be interested to know never heard facts about Neymar Jr, watch the below video.

He played for the 2013 FIFA Confederations Cup On 3 June 2013, Neymar was officially signed by Barcelona after passing medical tests and signing a 5 years contract. Neymar's transfer fee was €57.1 million and his release clause set at €190 million.

.He made his remarkable seasons with Barcelona playing along with greatest football stars like Lionel Messi and Luis Suarez.The trio was named the best football trio ever before he joined PSG.

Neymar Joined PSG On 3 August 2017, on a five years contract Worth $500 million which is recorded to be the most expensive contract ever in football history. He has received several honorary titles through his career. Some of his major awards are listed below