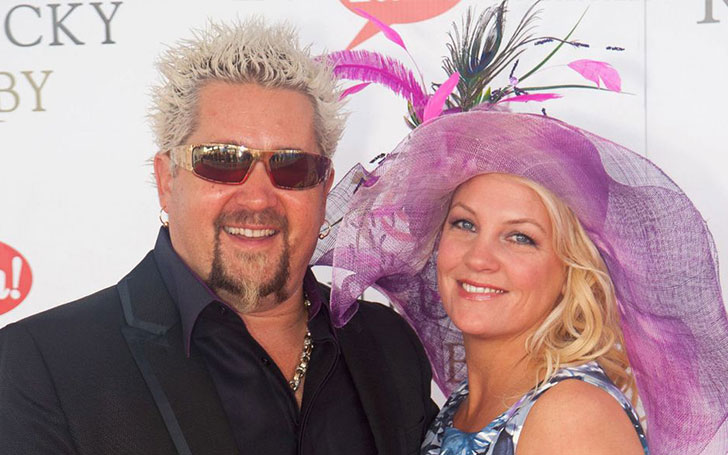 American restaurateur, author, game show host, and an Emmy Award-winning television personality Guy Fieri is one of the most recognizable celebrity chefs in the world. The chef gained fame for his appearances in Diners, Drive-Ins and Dives, Food Network Star, Guy's Grocery Games etc. The multitalented chef’s career took different paths and he amassed a huge net worth from it.

The man who started his career by selling pretzels from his "Awesome Pretzel" cart and washing dishes is now one of the most respected celebrity chefs in the world.

The chef is a happily married man, he tied the knot in 1995 to his wife Lori. He lives a very happy life with his wife and kids. Fieri claims that he fell in love at the first sight of his wife. The couple is blessed with two sons. Today we are here to reveal how the journey of the pair began? How did they meet?

The Incredible Story Of Guy Fieri And His Wife Lori's-How They First Meet?

Fieri and Lori met in a restaurant more than 22 years ago, he was running a restaurant in Long Beach, California, USA when he went in to do some damage control and met the love of his life.

Lori’s friend was going to be fired at the restaurant, Fieri was talking to the friend when he saw her who gave him a mean look at the time.

He was firing her friend and told her to come back after a few weeks, Lori didn’t take any of it and immediately came to her friend’s defense. She said, 'You can't make us leave,' and I was like, 'You don't have to.'," he said.

Although Lori wasn’t from Long Beach but was driving through the area at the time. She wanted to move to San Diego from Rhode Island but Guy said: "She never made it to San Diego”.  After they met they got to talking and the planets aligned, soon they were in a relationship and fell deeply in love with one another.  Then things escalated quickly in their marriage and they got married.

You May Be Interested: American Chef Andrew Zimmern Is Happily Married-Details On His Wife And Son

Know The Details Of Their Marriage And Children

The couple got married in 1995 and their marriage spans more than 23 years-still going strong. They are blessed with two children, both of them sons.

Although the spotlight rarely leaves Fieri alone he revealed very little information regarding his marriage and past relationships.