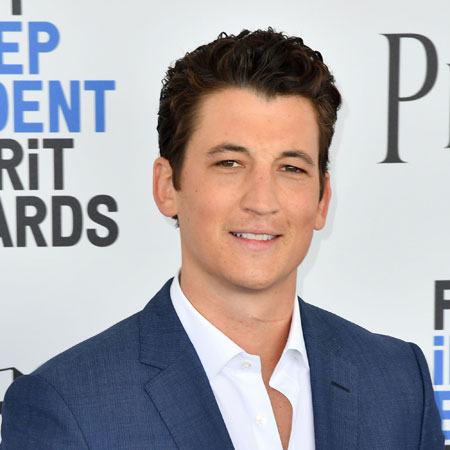 Born and raised in Downingtown, Miles Teller rose to stardom for his major role in a 2013 American romantic comedy-drama film The Spectacular Now. His performance in the movie earned him a Dramatic Special Jury Award at the 2013 Sundance Film Festival.

Teller’s career reached a new height in 2015 when he portrayed Peter Hayes in a successful science fiction action film The Divergent Series: Insurgent. He is also known for his work in several hit movies, including That Awkward Moment, Fantastic Four, Divergent, and Whiplash.

Born on February 20, 1987, in Downingtown, Pennsylvania, United States, Miles Teller is the son of Merry and Mike. He grew up in his hometown Downingtown along with his older sisters Erin and Dana. His father is a nuclear plant engineer. His paternal grandmother is of Irish and Polish ancestry while his paternal grandfather was of Russian Jewish descent.

Teller belongs to American nationality and ethnicity wise, he has a mixed ethnical background. At the tender age of 12, he moved to Citrus County, Florida along with his family. Later, he attended the Lecanto High School. At the time he used to play the alto saxophone in a rock band and a former drummer for a church-youth group band.

Not only the drums, Teller can also play the piano and guitar. He also worked at the restaurant Crackers. Following his high schooling, he enrolled the Tisch School of the Arts at the New York University and studied method acting at the Lee Strasberg Theatre and Film Institute.

In 2007, Teller suffered from an accident. He was a pa s senger in the car that lost control at 80 mph and flipped eight times. During the time, he ejected through the window that resulted in multiple visible scars on his face from the accident.

At the beginning of his career, Miles Teller landed a small role in a number of short films. He made his silver screen debut portraying Jason in a 2010 American drama film, Rabbit Hole alongside Nicole Kidman, Aaron Eckhart, and Dianne Wiest, among others.

After making an appearance in the stage musical Footloose as a schoolboy, Teller also became the cast member in the movie remake of Footloose in 2011. The following year, he landed the role in the movie Project X.

Teller is also in the cast of upcoming American crime drama web television series Too Old To Die Young. The series is set to be premiered its first episode in 2019 on Amazon Video.

Here is the list of his all-time hit movies

Miles Teller has been active in the field of acting for more than a one and a half decade. With his successful acting career, he has won a number of awards and got many other nominations in various category. He won Sundance Film Festival award for his performance in The Spectacular Now, in 2013.

Teller received CinemaCon Award for his role in Fantastic Four, in 2015. After a year, he was nominated for Teen Choice Awards for his mind-blowing performance in a 2015 American science fiction action film The Divergent Series: Insurgent.

Miles Teller's Net Worth and Height

Miles Teller is a successful American actor who has earned a tremendous amount of money from his acting career. According to Celebrity net worth, Teller has an estimated net worth of around $12 million, as of March 2018.

Teller owns Ford Bronco that worth around $40,000.

Teller has been the part of a number of successful movies some of them are listed below.

Miles Teller has been active in the field of acting for more than a one and a half decade. With his successful acting career, he has won a number of awards and got many other nominations in various category. He won Sundance Film Festival award for his performance in The Spectacular Now, in 2013.

Teller received CinemaCon Award for his role in Fantastic Four, in 2015. After a year, he was nominated for Teen Choice Awards for his mind-blowing performance in a 2015 American science fiction action film The Divergent Series: Insurgent.

The Spectacular Now’s star has been in a long relationship with his girlfriend Keleigh Sperry for around four-year. The couple first met when Teller was arrested for public intoxication in San Diego, California, in June 2013.

Following the incident, the couple was spotted in the public places in Los Angeles. The power couple also attended the 2016 Met Gala together, making heads turn. The same year, they spotted at the 2016 MTV Movie Awards and shared a pa s sionate kiss while posing for the cameras.

In an interview with the E! News in 2015, Teller told that Sperry was “lovely.” “It’s been pretty easy because right now, her full-time gig is kind of being with me and before her, I would never invite a girl into that world because I didn’t think I could have both,” he said.

He also added, “She’s allowed me to be able to really focus on acting and do what I want to do. She can come and visit me and hang out and doesn’t really distract me from it.”

Teller and his longtime girlfriend Sperry got engaged on August 20, 2017, at the Molori Safari lodge in the Madikwe Game Reserve. At the time of their engagement, the pair went to Seychelles before heading to South Africa.

Keleigh’s 25-year-old sister Christine Sperry York has shared the news of their engagement via Instagram, in which Keleigh was seen spotting the big diamond ring. It’s been over four-year, the couple is going well even at present with no rumors of a break-up.