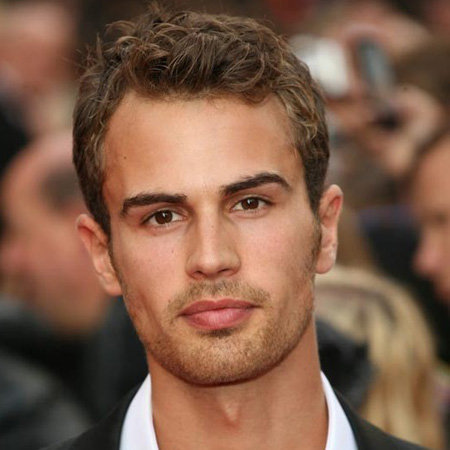 Theodore Peter James Kinnaird Taptiklis, popularly known as Theo James is a young and handsome actor. English actor is known for his performances in the roles of Jed Harper in the movie Bedlam, Tobias “Four” Eaton in the sci-fi novel Divergent, and Walter William Clark Jr. in the series Golden Boy.

He has been nominated five times for his performance in the years 2014 and 2015 for the work in the series Divergent, among which he has won two awards.

He has been active in the film industry since 2010 and has grabbed 3 awards within this short period of time. Theo James married Irish actress Ruth Kearney in August 2018.

Theo James was born Theodore Peter James Kinnaird Taptikis on 16 December 1984, in Oxfordshire, England.  He was born to his father Philip Taptiklis and his mother Jane Martin.

He has little Greek ancestry with an English and Scottish mixture. He has four siblings; two sisters and two brothers and he is the youngest child among five children of his parents.

He had attended Aylesbury Grammar School and earned his undergraduate degree in philosophy from the University of Nottingham.

After completing his undergraduate degree, he decided to join acting classes and attend Bristol Old Vic Theatre School to improve his acting skills.

Before involving in the acting fraternity, James worked at the National Health Service in England, where he used to go to the homes of the recently deceased and clean up any bodily fluids left behind. He also worked as a bartender.

Theo James’s acting career started off as he made his debut on the television screen in the role of Alex “Craze” Crazenovski in the series A passionate woman in 2010. That series was a two-part drama miniseries and aired on BBC One from 11-18 April 2010. Afterward, he landed in the role of Turkish diplomat Kemal Pamuk in an episode of the first season of Downtown Abbey.

Then, he never had to look behind. His popularity began increasing and he started getting several projects that keep him busy. It is pretty obvious for an actor like him who has the looks as well as skills to be popular and established.

In 2011, he appeared in six episodes of a supernatural British series Bedlam. He next played made a guest appearance in a series BBC series Room at the Top. In 2013, James played the lead role in the American crime drama series Golden Boy. In 2017, he performed the role of Ethan in a stage show, Sex with Strangers in Hampstead Theatre.

Theo in You Will Meet A Tall Dark Stranger

In 2010, he made a debut in the multiple language films You Will Meet A Tall Dark Stranger. Following the success of this film, he appeared in a comedy film The Inbetweeners Movie (2011). In 2012, he was a part of the American 3D film Underworld: Awakening.

In 2014, his major breakthrough film The Divergent was released. It was the first installment of The Divergent Trilogy and he featured in a lead role alongside Shailene Woodley and Ashley Judd. The film received a positive response from viewers and audiences. It was based on the novel of the same name.

Following the success of The Divergent, most of the cast returned in the sequel, The Divergent Series: Insurgent in 2015. Divergent’s final part came out in 2016.

After working in The Divergent Trilogy, he became a popular actor in the industry and engaged in several projects. In July 2018, his new movie, How It Ends released on Netflix.

Besides acting, he is also interested in music. He used to play guitar and sing a song during his childhood. He is a member of the former London-based boy band Shere Khan.

In 2012, the band announced through their Facebook page that they no longer will be acting as a band and that members would be pursuing other musical endeavors.

The Divergent star is one of the richest actors in the industry. His net worth is $4 million, as of 2022. He has ama s sed a huge net worth with his numerous high-earning movies and television works. Reportedly, the actor earns over $1 million annually through his several endeavors.

He has endorsed a number of brands including GQ and Hugo Boss. Here is the list of Box Office Collection of his highest-earning films.

James lives in a lavish mansion in Prince Risborough, the UK with his longtime partner Ruth Kearney. He primarily drives an Audi R8 which is available for $162,000 on the market.

Theo James was involved in several charity works for a long time. He has supported numerous nonprofit organizations throughout the World. In June 2016, He traveled to Greece with UNHCR and met Syrian refugees to learn more about the situation of refugees.

The British actor Theo James was in a long-term relationship with fellow actress Ruth Kearney before making her his wife. They met while they were students at the Bristol Old Vic Theatre School.

James dated actress Ruth Kearney in 2009. They often appear together at different parties, functions, and celebrations.

Previously, there were rumors about their breakup when he became cozy with his The Divergent co-star Shailene Woodley. But, it turned out false when James was spotted holding hand with Kearney in award ceremonies.

Despite several ups and downs, the couple got their happy ending when they eloped in August 2018. The pair tied the knot in an intimate ceremony.

THEO JAMES AND HIS GIRLFRIEND OF LIKE 1000000 RUTH KEARNEY YEARS FUCKING GOT MARRIED pic.twitter.com/JPwF48bobF

And the couple is still going strong. The couple also travels to different parts of the World during their vacation and holiday. It seems he has been loyal to his girl and is living a very happy life with her.

His wife Ruth Kerney is an Irish actress who is best known for her series Primeval, London in Netflix series Flaked, and Daisy in The Following. In 2017, she appeared in a TV series, Becca Morgan.