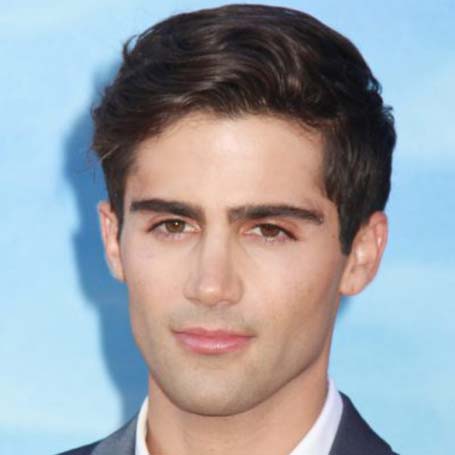 Max Ehrich is an American actor and dancer famous for appearing on the TV series Under the Dome and The Path. He is also known for appearing in the 'The Pregnancy Pact' and 'Parenthood' for which he was nominated for a Young Artist Award for two years in 2011-12.  He, however, got media and public attention following his relationship, engagement, and then infamous break up with singer and actor Demi Lovato.

For education, he enrolled at Marlboro Middle School and continue his high school at Marlboro High School. Later on, he went to Performing Arts School from where he learned professional acting.

Ehrich was interested in acting since his childhood days and merely started a side project in his life since the age of four after being involved in community theatre.

While he was eight years, he joined French Woods Performing Arts summer camp where he contributed to that program for honing his craft.

In his early days, he also took training in dance through a local dance school, Dance Attitudes in New Jersey. Later on, he went to Performing Arts School in Manhattan, New York to learn professional acting.

Max Ehrich made his big-screen debut in the movie, One Easy Job (2004). After that, he had a supporting role as a principal dancer in the movie named High School Musical 3: Senior Year. His career got limelight after he made his guest appearance in Ugly Betty's Season 3 with the role of Randy.

CAPTION: An American actor and dancer famous for appearing on the TV series Under the Dome and The Path. SOURCE: Canoe

Prior to this, he has worked in the movies The Pregnancy Pact in 2009 where he appeared alongside Camryn Manheim, Thora Birch, and Nancy Travis. He has also worked in two pilots for CBS in 2010 and has since shot another pilot as a repeating visitor for the new Country Music Television sitcom, Working Cla s s.

His recent appearance is the Netflix movie Walk. Ride. Rodeo.

Net Worth, Salary, And Earning

The multi-talented Hollywood star, Ehrich must have a net worth in seven dight number, as, his estimated fortune is around $2 million.

Enrich and Levato were first spotted together in March 2020, and their romance rumors sparked when the latter crashed one of the former's Instagram Live videos. The fans were immediately curious to know about the possible couple, which was finally confirmed with a kiss on Justin Bieber and Ariana Grande's Stuck With U music video.

The pair confirmed their engagement in July and was called off shortly after two months in September. Though Demi claimed that the breakup was mutual, Max did not felt the same way. He made a series of videos on social media and claimed to be blindsided by the singer. He accused her of “exploiting [the] breakup for clout.”

CAPTION: Former couple Max and Lovato got engaged in July 2020 and separated only after two months in September 2020 SOURCE: Times Of India

On the other hand, Levato proclaims she wanted “nothing to do with him ” and felt “too gay to marry a man right now.” Later in her doc u mentary Dancing With The Devil, the actor c u m singer stated:

“I think I rushed into something that I thought was what I was supposed to do. I realized as time went on that I didn’t actually know the person that I was engaged to. All the people that were like, ‘oh they rushed into it’ or like, ‘they are not going to last.’ Then, you proved them right. We were only together for four or five months. And honestly, it was false advertising.”

As of April 2021, it seems like Max has finally moved on. He was spotted cozying up with rising model Mariah Angeliq at a beach. Though the couple has not confirmed their relationship, their closeness seals the deal.

Prior, he was in a relationship was with Veronica Dunne whom he dated for a long time before separating in July 2017. He also dated actress, Jennette McCurdy for a short period.

Apart from this, he was also rumored to be in a relationship with famous celebrities like Sarah Hyland, Sommer Ray, and Jemma McKenzie-Brown.