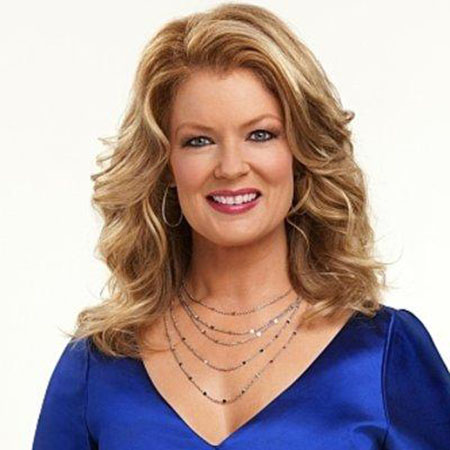 Mary Hart is an American TV personality. She gained a lot of fame as the long-running host from 1982–2011 of the syndicated gossip and entertainment round-up hit program Entertainment Tonight, which is the longest-running entertainment magazine show of all time. The notable TV  personality was also Miss South Dakota 1970 before becoming the semi-finalist in the Miss America 1971 pageant. Hart has been married to TV and film producer Burt Sugarman for a long time, and the two are also blessed with one child Alec Jay Sugarman.

Mary Hart was born on November 8, 1950, in Madison, South Dakota, United States of America. She lived in Sioux Falls, South Dakota, and Denmark as a child and teenager.

Hart also can pull off different languages like Danish and Swedish. After becoming the Miss South Dakota, Hart competed in the Miss America 1971 pageant, where she became a semi-finalist. She graduated from the Augustana Academy in 1968. Following her graduation, she went on to study at Augustana College in Sioux Falls.

Mary Hart started her television career began in Omaha, Nebraska. Mary Hart co-hosted a show Dannysday with Danny Williams in 1976. She moved to the Los Angeles neighborhood of Westwood in 1979 after deciding to leave journalism.

She landed a small role on the soap opera Days of Our Lives. Mary Hart co-hosted the Los Angeles version of syndicated PM Magazine. After that, she got a job as co-host in Regis Philbin’s first national talk show on NBC, but the show got canceled four months later.

She felt bad after the show was canceled, but she soon got hired as an ET correspondent. Mary was named the show’s co-host thirteen weeks later. After being hired by ET, Mary Hart chose Jay Bernstein as her manager. She signed a contract with Hanes for the company’s pantyhose line in 1987. Her legs were so shapely that they were insured for $1 million each by her manager.

Hart also participated in the WWF’s WrestleMania III. She was the guest timekeeper in the main event between Hulk Hogan and Andre the Giant. Mary Hart was announced as the official spokeswoman for Edith San ]ford Breast Cancer Initiative in 2011.

Mary Hart suffered a broken left wrist from an accident at her home in 2009. In a TV show named Baby Daddy, Hart plays a recurring character as a fictional version of herself. She made a guest appearance on ET on October 29, 2015.

Mary Hart's Net Worth And Salary

Mary Hart has collected a decent amount of money as a renowned TV personality. She has an estimated net worth of around $100 million per Celebrity net worth just like Jim Cramer. She was the long-running host 1982-2011 of the syndicated gossip and entertainment round-up program Entertainment Tonight. And her annual salary as a host was more than $59253.

In April 2016, Hart sold her house-sized penthouse at the Ritz-Carlton Residences at LA Live in downtown Los Angeles, CA, for $6.7 million. They originally bought the mansion in April 2013 for $3.5 million. It has a 4,250-square-foot spread, with glittery, wrap-around city-light views, three en-suite bedrooms, and 3.5 bathrooms.

Mary Hart first married her ex-husband Terry Hart. However,  the marriage could not last long, and finally, she divorced Terry in 1979. After getting divorced from her first husband, Hart married film producer Burt Sugarman.

The couple resided in the Trousdale Estates neighborhood of Beverly Hills before moving to a condo in the Ritz-Carlton Residences at L.A. Live in downtown Los Angeles.

Later in 2015, they moved to Sierra Towers. The couple is also the proud parents of their son named Alec Jay Sugarman. Mary Hart owns two mansions in Montana within the Yellowstone Club residential community. No rumors of extramarital affairs have been heard after her marriage to Burt.

They have been sharing their happy married life for over thirty years. They have a smooth relationship and haven't been found in the public eye following controversies or scandals.

Hart is also a huge fan of the Los Angeles Dodgers. She was a godmother of the Oceania cruise line's newest ship, Marina, in February 2011.