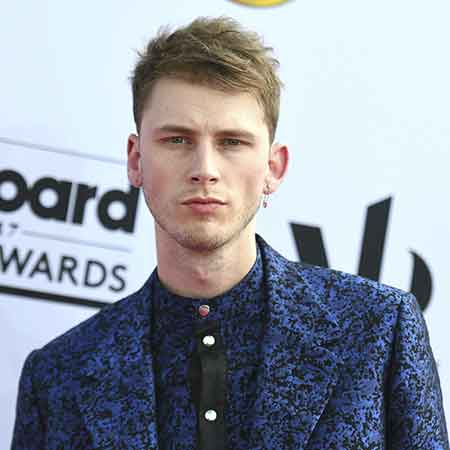 Machine Gun Kelly is a stage name of American rapper Richard Colson Kelly. He was given the name for his rapid-fire lyrical flow which also refers to notorious criminal George "Machine Gun Kelly" Barnes. Kelly rose to fame after releasing four mixtapes Stamp Of Approval(2006), Homecoming(2008), 100 Words and Running(2010), and Lance Up(2010). In 2010, Kelly earned an award of Best Midwest Artist and Best Music Video.

MGK was born to missionary parents. He moved to several countries in his childhood including Egypt, Germany and also lived in different cities throughout the United States like Chicago, Denver, and Cleveland.

His mother left home during his early childhood which made his father suffer from depression. MGK faced several challenges in his childhood due to his family condition, he was even bullied in the neighborhood due to his father's condition. MGK attended Hamilton Middle School where he started listening to the rap songs. He attended Dever's Thomas Jefferson High School after completion of his school education.

Initially, he started to listen to Ludacris, Eminem, and DMX which inspired him to be a rapper. While in high school, he recorded his first amateur demo tape Stamp of Approval in 2006. He also started taking drugs during high school.

MGk started living with his father and his aunt in Denver after his mother left. After some time, his father moved to Kuwait for his military work. In 2005, his father returned to take them both to Kuwait, however, the pair was forced to return to Cleveland, where MGK attended Shaker Heights High School. At that time, he convinced a local t-shirt shop owner to be his MC manager. During this phase, he got his stage name Machine Gun Kelly.

MGK started his career during his high school days when he also recorded his first mixtape Stamp of Approval. After releasing his mixtape, he began performing at local Cleveland Venues.

In February 2010, Kelly released his second mixtape 100 Words and Running where he derived his catchphrase "lace up", which he made a prominent reference in his music. During his first few years as a rapper, he worked at Chipotle to support his livelihood.

In May 2010, he made his national debut with the single "Alice in Wonderland", it was released via Block Starz Music on iTunes. His single received a positive response and earned him the Best Midwest Artist Award at the 2010 Underground Music Awards.

In November 2010, Kelly released his second mixtape  Lace Up which featured the hometown anthem of "Cleveland".

In March 2011, Kelly participated in the first SXSW show in Austin, Texas. After that, he signed a recording contract with Bad Boy Record and released a music video "Wild Boy" featuring Waka Flocka Flame.

In October 2012, his debut album Lace Up was released which picked number 4 on the US Billboard 200. The single Invincible from the album featured the official theme song of WrestleMania XXVIII which is also the theme for Thursday Night Football on the NFL network.

In February 2013, Kelly came up with a music video for Champions which featured rapper Diddy. This music video also served as a promotional video for his new mixtape Black Flag, released on June 26, 2013. The mixtape featured the guest appearances from French Montana, Kellin Quinn, Dub-O, Sean McGee and Tezo.

Besides music, Kelly has also appeared in many films such as Beyond the Lights, where he played a role as a kid culprit and later, he was starred in Roadies as Wesley aka Wes. Later, he was cast in lead roles in Viral, Punk's Dead: SLC Punk 2 and Nerve.

MGK has earned a number of Awards & Nominations, some of them are:

As of 2018, Machine Gun Kelly has an estimated net worth of $8 million. The major part of his net worth comes from his rap career while he also earns money from his acting works. He has earned a handsome amount of money from acting in movies like Nerve, Starring Emma Roberts and Dave Franco, playing the role of TY.

He has even appeared in movies "Beyond the Lights, Viral, and The Land".

Kelly also works as a composer; he has got credits for composing the songs including At My Best with Hailee Steinfeld and “Bad Things” with Camila Cabello.

In addition, Kelly makes money from endorsement deals. He had a paid partnership with Reebok to promote its Club C sneaker. Some of the other celebrities who have endorsed Reebok’s Club C shoe are model Gigi Hadid and rapper Kendrick Lamar.

Talking about the rapper Machine Gun Kelly's relationship status, he is single. As of 2018, he is not dating anyone, however, he was in the relationships with some girls in the past. He also has a daughter Casie Kelly from his previous relationship with Emma Cannon. He was just 18 years old when he welcomed his daughter in 2008. The couple is not together now, however, they have maintained a friendly relationship for sake of their daughter.

Kelly was in a relationship with Sevyn Streeter, a singer in 2014. Kelly kept the relationship under the media radar and there is no further information about their relationship and breakup.

In 2015, it was reported that he was dating a Hip Hop model Amber Rose and they broke up within months due to their irreconcilable differences.

Rapper Machine Gun Kelly said he was once addicted to heroin. He also talked about his struggle with cannabis addiction. Later, Kelly joined rehabilitation center to combat with the addiction. Kelly even attempted to commit suicide while he was in addition.