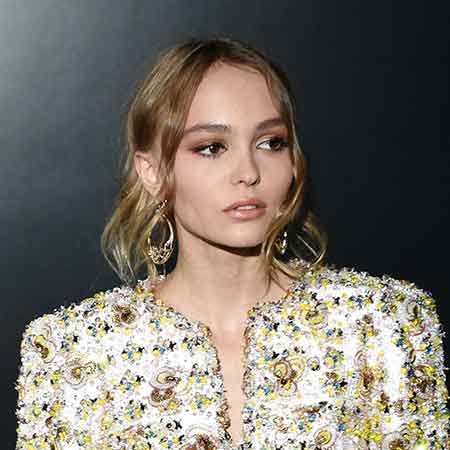 The gorgeous, talented, and flawless offspring of legendary actors Johnny Depp and Vanessa Paradis, Lily-Rose Depp became famous before her birth. Since the beginning, she has been accustomed to the world of art and each stage of Lily's life has been highlighted in detail. A French-American actress and model, following her parents' path, started her acting journey in the film Tusk by Kevin Smith in 2014 at the age of 14. Along with her flourishing acting career, Deep has also worked for several reputable brands and companies as a model. At the age of 16, she bagged her first Chanel No.5 campaign and became the face of its perfume L'Eau. A rising actress has also a tremendous fan following on her Instagram account where she has over 3.3 million followers as of October 2018.

Lily-Rose Depp was born on 27 May 1999, in Paris, France. She is the daughter of the once most famous Hollywood couple: Johnny Depp and Vanessa Paradis. Her father Depp is one of the legendary actors, better known for his portrayal of eccentric characters in films like Ed Wood, while her mother Paradis, is a French singer, actress, and model.

Depp has a younger brother John Christopher Depp III. Her parents, however, separated in 2012 after around fourteen years of togetherness and arranged joint custody of their daughter Depp. She then spent her childhood living in two houses, alternately spending time with her father in Los Angeles, and then with her mother in Paris.

In the year 2016, Deep dropped out of high school in order to give her full concentration and time to her career.

Lily-Rose Depp started her journey as an actress in 2014, making her big screen debut in a comedy thriller Tusk aired at the Toronto International Film Festival. In the movie, she featured sharing the screen alongside her father and her friend Harley Quinn Smith.

Along with her meteoric acting career, Deep is a successful model too. She posed for a photo-shoot in the well known Australian magazine Oyster in April 2015. And in September, she started working as an amba s sador for a French private company Chanel.

Likewise, her significant role in a 2014 horror comedy Yoga Horses earned her a lot of popularity.

In May 2016, Deep went on to become the face of the Chanel No. 5 perfume. Her other movies credits Planetarium and A Faithful Man as well. She also played the role of Isadora Duncan in the movie The Dancer for which she received both 42nd Cesar Awards and 22nd Lumieres Awards nomination.

Lily-Rose Depp's Net Worth And Salary

Young actress Lily-Rose Depp has been the subject of tabloid and media reporting, including even her birthdays and attendance at social events since her birth. And her charming looks with perfect acting skills took her career to the next level. As per some online sources, she has an estimated net worth of around $1 million. She is also a model who earns an annual salary of $41,700.

Her father Johnny Depp's estimated net worth is around $200 million. In 2014, he was paid $20 million as a salary for Into the Woods. He has also a 37-acre village in the south of France which is located outside the exclusive seaside town of Saint-Tropez. To renovate its 18th-century building, the actor spent around $11 million and as of now the house in on the market. The state also includes 15 bedrooms and 14 bathrooms in total.

Lily-Rose Depp is yet to be married. She was in a romantic relationship with her ex-boyfriend Ash Stymest. Stymest is a professional model, actor and also a music producer. He also played in a music video of a famous Korean girls group 2NE1.

The couple started dating in the late of 2015. Shortly after that, they were spotted kissing in the streets of Paris. They were also seen shopping together several times in Los Angeles.

Because of their significant age difference of eight years, the relationship between these two rising stars was controversial from the beginning. The couple, however, could not last long and parted ways in April 2018.

Two days ago Timmy with Lily Rose Deep Wait is she embracesing him??

As of October 2018, According to People magazine, model Lily-Rose Depp, 19-year-old is reportedly dating Call Me By Your Name star Timothée Chalamet, 22. The two together is going to feature in the Netflix's upcoming drama, The King. The rumored couple has not publicly addressed their relationship status but a source close to the couple have recently snapped photos that hint at a potential romance.

During a stroll in New York, the pair was seen getting very cozy. Neither Deep nor Chalamet has confirmed their relationship officially.