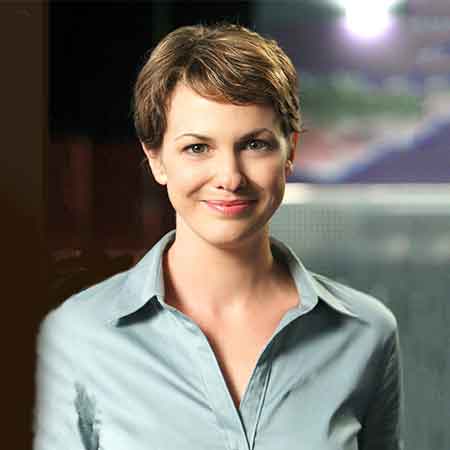 American actress, Larisa Oleynik made her acting debut at the early age of eight. She has worked in numbers of movies and TV series, particularly, she is famous for her role of an average teenager, Alex Mack in Nickelodeon TV series The Secret World of Alex Mack. Her amazing works helped her to grab a huge fan following.

Larisa Oleynik was born Larisa Romanovna Oleynik on 7th June 1981 in Santa Clara County under the birth sign Gemini. Oleynik is the daughter of Lorraine, a former nurse, and Roman Oleynik (1936-2003), an anesthesiologist.

May your holiday cooking always include a nearby bottle of vodka. Happy Thanksgiving

Her parents raised her in the Eastern Orthodox Church and in the San Francisco Bay Area. Regarding her academics, she attended Pinewood School in Los Altos, California.

She later attended Sarah Lawrence College. She was interested in acting since the beginning and used to audition from the very young age.

At the age of 8, Larisa Oleynik gave an audition for the production of Les Miserables after seeing an audition ad in a newspaper. She eventually, got the two singing roles. After the success of the musical, she moved to movies and TV series.

Oleynik made her TV debut in 1993 at the age of 12 in an episode of Dr. Quinn, Medicine Woman created by Beth Sullivan. The same year, she made her TV-movie debut as Gail Keene in River of Rage: The Taking of Maggie Keene.

Her breakthrough came in Nickelodeon's TV series, The Secret World of Alex Mack where she portrayed the role of an average teenager in Paradise Valley, Alex Mack. The series starred Darius Love, Meredith Bishop, and Michael Blakley. She was a s sociated with the series from 1994 to 1998 appearing in 78 episodes.

Oleynik then worked in several TV movies and TV series. As of 2018, she portrayed the lead role in Half-Life.

Oleynik made her movie debut as a voice actor in Richard Rich's 1994 movie, The Swan Princess. The following year, she worked as Dawn Schafer in comedy-drama film, The Baby-Sitters Club starring Schuyler Fisk, Bre Blair, and Zelda Harris.

Moreover, she gave numbers of movies to the industry. As of 2018, she is working in three upcoming movies Accommodations, Animal Among Us, and Auggie.

Larisa Oleynik has an estimated net worth of $4 million as per Celebrity Net Worth. Oleynik earns an impressive amount from her movies and TV series. According to some online sources, a TV star earns an average salary that ranges from $150k to $1 million. Furthermore, She has many upcoming projects from which we can a s sume to see a rise in her net worth in the coming future

Besides, she owns a house in Los Angeles, California. With such earning, she is living a lavish lifestyle.

Larisa Oleynik is very confidential when it comes to her personal life and relationship. She prefers to keep her dating life and boyfriend far from the limelight and media. The talented actress is hardworking and ambitious which might be the reason behind her focusing more on her career rather than involving in any serious relationship. So, as of 2018, she is possibly single.

Although Oleynik dated some of her fellow actors in her past, she managed to cover up all her past affairs. Back in the 90s, she was linked to the actor, Joseph Gordon-Levitt. The actor is now married to his businesswoman wife, Tasha MacCauley. The couple shares a son together.

She was granted a restraining order in January 2013 against one of her fans who she claimed was so eager to change his last name to hers and also he left several gifts for her at her mother's apartment.

Here is an interview with Larisa Oleynik.