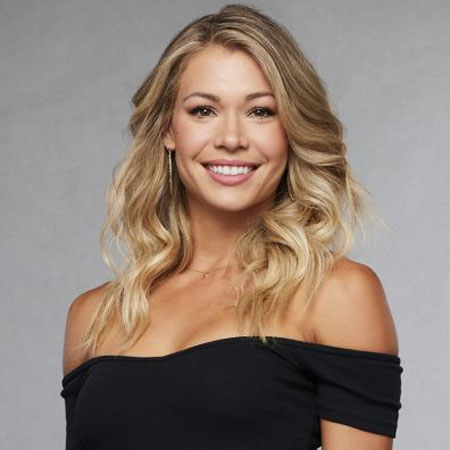 American fitness guru, Krystal Nielson is best known for her appearance in the 22nd season of the popular ABC reality show, The Bachelor. She works as a personal trainer at San Diego based fitness club, Orangetheory Fitness in the Point Loma studio.

Krystal Nielson has been dubbed the 'most annoying voice' in TV history by comedian and late-night show host Jimmy Kimmel.

The Bachelor's Arie Luyendyk Jr. favoring her amongst other girls caused a controversy leading to many calling out Nielson as the villain for her tantrums and Arie ''the worst bachelor ever.''

Krystal Nielson was born on October 15, 1987, in Missoula, Montana. She is American and belongs to White-American ethnicity. Her birth sign is Libra. She has a younger brother.

Initially Worked as an RJ

Krystal Nielson worked as an RJ at 103.3 KISS FM during the initial phase of her career.

In 2012, Nielson moved to LA in order to pursue her career in entertainment reporting. She left journalism after she found her pa s sion for fitness.

Nielson worked as an Orangetheory fitness coach in the Point Loma studio as a fitness trainer. Orangetheory is a one-hour, full-body workout gym cla s s that focuses on training endurance, strength, and power. Her trainee clients ranged from older teens to senior citizens.

Nielson is a NASM-certified personal trainer, she is also a nationally qualified bikini competitor, yoga sculpting instructor, and amba s sador for Yoga for the Homeless.

Appeared on The Bachelor Season 22

She was one of the 29 contestants who competed for the heart of Arie Luyendyk Jr., a former race car driver.

She shares a good bond with The Bachelor star Arie Luyendyk Jr. He took her to his hometown Arizona on their first date. Bachelors usually take only the last two girls to meet their families.

Rebecca Kufrin eventually became the winner of that season.

Engaged to Chris Randone During Bachelor in Paradise

Krystal Nielson competed on season 5 of ABC reality series, Bachelor in Paradis, where she coupled up with Chris Randone.

The two became engaged on the show in 2018 and one year later on June 16, 2019, they tied the knot in a lavish ceremony in Mexico.

Split With Husband After Eight Years of Marriage

It was only eight months of their marriage and on Valentine's Day of 2020, the pair gave a joint statement to announce that they had called it quits.

As per the report, the estranged couple was trying to have a baby before calling it quits on February 14, 2020.

According to multiple online sources, Krystal Neilson has an estimated net worth of $2 million.

Nielson featured on the reality show, The Bachelors and usually, the winning contestants of the show make $100,000 throughout the season.

Previously, on The Bachelorette Emily Maynard was the highest paid, $250,000 while the lowest-paid star was Ashley Herbert who earned only $30,0000

Provided Neilson wins the show, she will not only take home the prime prize, Arie Luyuendk jr. who will be worth at least $1 million, she will also get an expensive custom made engagement ring, as is the tradition on the show.

The Bachelor season 20, Ben Higgins proposed Lauren Bushnell with a custom designed 4.25 art deco masterpiece, reportedly worth a close to $100,000. It remains the most expensive ring ever given on the show to date.