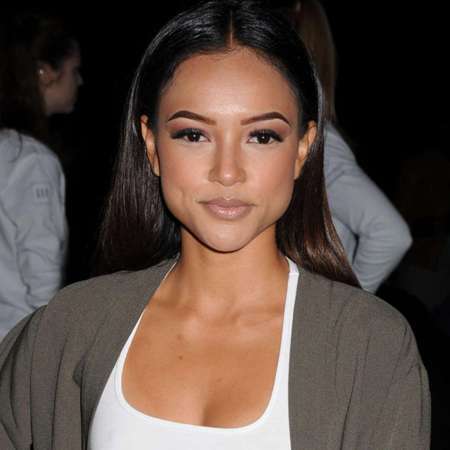 American model and actress, Karrueche Tran is working in the web series, The Bay since 2013. She is also working in TVT's series Claws. Tran appeared in several movies and TV series for which she has been nominated for several awards and won some of them as well.

Despite her work, she rose to fame after having an affair with Chris Brown.

Karrueche Tran was born Karrueche Tientrese Tran to mother Cindy Adamson and father Devon Minters on May 17, 1988, in Los Angeles, California under the birth sign Taurus. Her mother is Vietnamese and her father is African-American. Her parents raised her with her sibling, Raymond Adamson in LA. She is American by nationality and belongs to the African-American ethnicity.

Tran attended Fairfax High School. She moved to The San Fernando Valley with her family where she studied at the Birmingham High School and graduated in 2006. She then moved to Pierce College, where she graduated with a degree in Graphic Design in 2008.

Karrueche Tran began her career as a personal shopper in the fashion industry. Tran worked at Nordstrom at the Westfield Topanga mall in California. She then worked as a freelance celebrity stylist for Hollywood.

Furthermore, Tran has posed as the face of Lady Crooks and also featured in the lookbook of the Korean-based brand entitled Le Coq Sportif. She has also had the chance to appear on covers of several magazines like Rolling Out, Flaunt Magazine, Cliché Magazine, Annex Magazine, Flaunt Magazine, leu Magazine and also had two feature stories on ELLE.com.  At the time, Tran launched her own clothing line, The Kill.

Tran made his Hollywood debut in 2013 in the TV film, RIP The Runway. Two years later, she portrayed the role of Maggie, who was applying for a job. She shared the screen with Danny Trejo, Jaason Simmons, and Rob Van Dam.

In 2016, she appeared in the neo-noir action comedy film, The Nice Guys with Russell Crowe, Ryan Gosling, and Matt Bomer. As of 2018, she is working in Never Heard and The Honor List.

Since 2013, Tran is portraying the role of Vivian Johnson in Blip. tv's soap opera web series, The Bay. The series starred Kristos, Mary Beth, and Lilly Melgar. She then worked in several TV series in uncredited roles like The Dead Diaries, Single Ladies, Vanity, and Truth be Told.

Since 2017, Tran portrayed the main role of a former prostitute, Virginia Loc in TNT's TV series, Claws. She shared the screen with Niecy Nash, Jack Kesy, and Judy Reyes.

Karrueche Tran has been nominated for several awards and won some of them. Some of her won awards include:

Some of her other nominated awards include the Indie Series Awards twice.

According to Celebrity Net Worth, Karrueche Tran has an estimated net worth of $900 thousand. Karrueche earns a good amount from her acting career. She also earns from her clothing line.

Before dating Cruz, Trans was linked to Rapper Quavo after they were spotted leaving a Migos concert together in the same car where they appeared to be hugging.

Tran tweeted mentioning the rapper and demanded a photo of his d**k.

Her most famously talked about relationship is with a former boyfriend of Rihanna, Chris Brown. Chris and Tran dated from 2011 to 2015 which helped to increase her fame.

During their brief split in between, Tran dated basketball player John Wall from 2012- 2013. She has since been rumored to be dating many other celebrities since she broke up with Chris.

She has been known to have an affair with Ray J, Rob Kardashian, and most Netherlands football player Memphis Dupay among others.