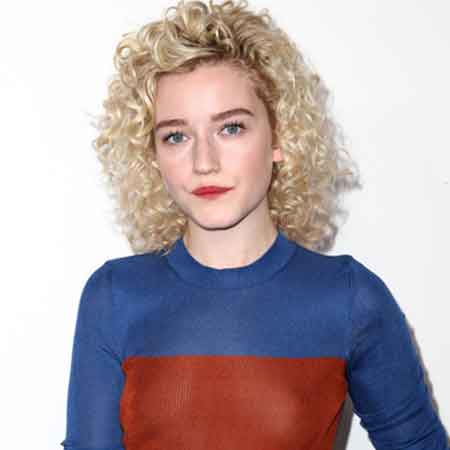 American actress, Julia Garner made her acting debut at the age of 15 in the short film, Julia. In 2012, Garner earned her first lead role in the independent film, Electrick Children. She then worked in several movies and TV series, particularly, is famous for her role in Netflix's web series, Ozark. Her performance in the series helped her to win Boston Globe, Best TV Performances Awards.

Julia Garner was born on 1st February 1994 in the Riverdale neighborhood of The Bronx, New York under the birth sign Aquarius. Garner is the daughter of Tami Gingold, a therapist who had a successful career in Israel as a comedian, and Thomas Garner, a painter, and an art teacher. Her parents raised her with her sister, Anna Garner in a Jewish family.

At the age of 15, Garner took acting classes in order to overcome her shyness.

Garner belongs to American nationality and regarding her ethnicity, she has a mixed ethnical background.

At the age of 15, Julia Garner made her movie debut in a short film, Julia. When she was 17, she portrayed the role of Sarah in the thriller drama film, Martha Marcy May Marlene directed by Sean Durkin. She explained about her first big movie,

''I started doing student films at Columbia grad school, and this one student filmmaker, his girlfriend was interning at an open casting call for Susan Shopmaker. Later on, she did the stage reading for Martha Marcy May Marlene, then she cast it, and that was my first movie.''

Moreover, in 2013, Garner earned her first lead role as Rachel McKnight (a girl from a fundamentalist Mormon community) in the independent film, Electrick Children where she starred with Rory Culkin and Liam Aiken.

Some of her other works include Not Fade Away, We Are What We Are, Grandma, Tomato Red, and Everything Beautiful Are Far Away among others.

Garner made her TV debut in 2015 where she appeared in a recurring role of the daughter of the head of CIA's Afghan group,  Kimberly Breland on FX's period spy thriller TV series, The Americans. The series starred Keri Russell, Matthew Rhys, and Holly Taylor.

However, her breakthrough came in 2017 on Netflix's crime drama web TV series, Ozark where she appeared as a lead character Ruth Langmore (who is a part of a local criminal family). Since 2017, she is working in the series with Jason Bateman, Laura Linney, and Sofia Hublitz. Her performance helped her to win the Boston Globe. Best TV Performances Awards in the category of Best TV Performances.

As of 2018, she is working in TV series like Waco and Maniac. From 2018-19, the actress landed the role in the TV series Dirty John. Her upcoming projects are Modern Love, The Assistant, and You Can's Win.

The talented actress, Julia Garner has an estimated net worth of not less than $1 million, but, the amount is not revealed yet and is still under review.

Below is the list of her movies that made a huge box office collection:

Furthermore, some of the lead cast of Netflix's TV series, Jason Bateman and Claire Danes earn a salary of $380k per episode. Garner is also a lead cast of the series so, she might also earn the same amount.

Julia Garner has appeared in the movies and TV shows such as Everything Beautiful Is Far Away, One Percent More Humid, Tomato Red, Good Kids, Grandma, Sin City: A Dame to Kill For, and I Believe in Unicorns.

She has worked in TV shows including Maniac, Waco, Ozark, The Get Down, Girls, and The Americans. She has appeared in short films such as The Dreamer, One Thousand Cranes, Our Time, Mac & Cheese, and Send.

As of 2019, Julia Garner is not married yet but is in a relationship with his fiance Foster the People’s lead singer Mark Foster.

The couple enjoyed a trip to Yellowstone National Park in April 2019.  At that time, the two also got engaged. The actress was spotted at the anthology crime series Dirty John’s For Your Consideration panel held in Los Angeles wearing a sparkling diamond ring on her ring finger.

Julia is very much focused on her career, so, metaphorically there is no harm to say, she is dating her career.

The young and talented American actress, Garner is hardworking and ambitious and has a huge fan base. She also has impressive followers on her social media. As of September 2018, she has over 75k followers on her Instagram account.

Check out the facts about Julia Garner: