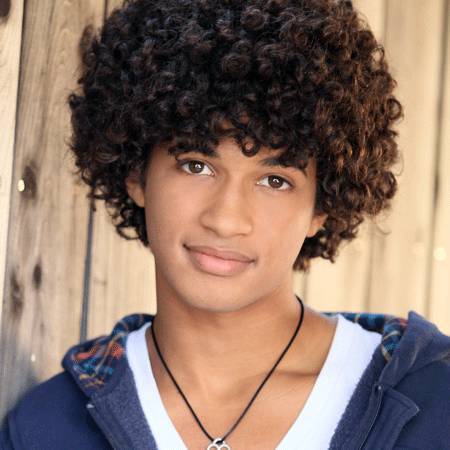 Jordan Fisher is the actor known best for his role as Jacob in the highly popular ABC Family Television series named The Secret Life of the American Teenager. He was nominated for Teen Choice Awards for his performance in Teen Beach 2. Along with the actor, he is also a singer and a dancer. In 2017, he won the title of Dancing with the Stars.

Jordan Fisher was born Jordan William Fisher on April 24th of 1994, in Birmingham, Alabama, the U.S. under the birth sign Taurus. Fisher is American as per nationality and as far as his ethnicity is concerned, he is African-American.

His mother gave birth to him when she was 16 and later, Fisher was legally adopted and raised by his maternal grandparents Rodney Fisher and Pat Fisher. Her grandparents also adopted his siblings, Cory Fisher, and Trinity Fisher, and raised them together in Trussville, Alabama.

From the early age of 2, Fisher started involving in gymnastics. His interest in musical theater was discovered when he was in the fifth grade. He was cast in the school production of School House Rock, Jr.

Regarding his academics, he was home-schooled as a child and later earned his high school degree from Harvest Christian Academy. He also joined the Red Mountain Theater Company and became part of a youth performing ensemble for years. While involving in the company, he was spotted by a talent scout.

Moreover, in 2011, he joined Jacksonville State University. The following year, he along with his family moved to Los Angeles, California from where he built his career.

Jordan Fisher made his acting debut in 2009 as Mario in an episode of The Hustler. After appearing in an uncredited role in some TV series, he portrayed the role of Jacob in 2012 in ABC Family's The Secret Life of the American Teenager. This is one of the most prominent and critically acclaimed roles he has played so far. He worked in the series with Shailene Woodley, Daren Kagasoff, and Francia Raisa.

The following year, Fisher made her movie debut in Disney Channel Original Movie, Teen Beach Movie starring Ross Lynch and Maia Mitchell. In 2015, he worked in the sequel of the movie which helped him to get nominated for the Teen Choice Awards.

In 2017, Fisher participated in ABC's dance competition TV series, Dancing with the Stars where he was partnered with Lindsay Arnold. They won the heart of the judges as well as audiences. They performed on the show even with the injuries.  Their hard work helped them to win the title of Dancing with the Stars.

What a whirlwind 24 hours! Winning @dancingabc, announcing the DWTS tour, visiting @goodmorningamerica, and performing "Mess" on @trl. Feeling so grateful and blessed. This is all for you guys. Thank you so much!

As of 2018, Fisher voiced Seahwak in an animated series, She-Ra and the Princess of Power. His work in several movies and TV shows helped him to earn a huge fan following.

Besides, he also worked on Broadway in Hamilton in 2016.

Fisher made her music debut in 2014 by releasing three pop-soul songs like ''By Your Side,'' ''Never Dance Alone'', and ''What I Got.'' The following year, he signed a recording deal with Hollywood Records. In 2016, he released his first track, Counterfeit for the label.

The same year, he released his first single, All About Us. The music video of the song was directed by TK McKamy. He posts his songs on his self-titled YouTube channel which has over 146k subscribers.

Jordan Fisher has an estimated net worth of $thousand, as per some sources, but, the amount is still under review. There is no doubt that he earns a good amount from his multiple careers that in acting and music.

Besides, Fisher also earns much from his online shopping, callitspring.com where he sells several men's and women's clothing and accessories.

Jordan Fisher is not married and has no children yet. Fisher is dating his girlfriend Ellie Woods with who,e he has recently engaged. He has shared the news of his engagement through his Instagram video.

They post several pictures on their social media which shows that they are enjoying each other's company.

we got to see two more dear friends tie the knot yesterday. It was perfect. So full of love and joy. We love love.

Fisher is happy with his relationship and says,

''I was not as lucky to have mine with me all the time.''

They have a long-distance relationship but have strong bonding. Fisher says,

''She’s freaking out right now about 2,000 miles away. She’s buried in books at the moment, but it’s the same thing — being able to have somebody that you love and that loves you and can accept all of the things you have to give them after a long, hard day of rehearsal, it’s unbelievable.''

Prior to his current relationship, he is dated actress Nicole Lamb. The former couple dated each other for a brief time. He was also in a relationship with model Audrey Case.

Moreover, Fisher has a huge fan following on his social media. As of 2018, he has over 1.5 million followers on her Instagram.

Check out the video with Jordan Fisher: