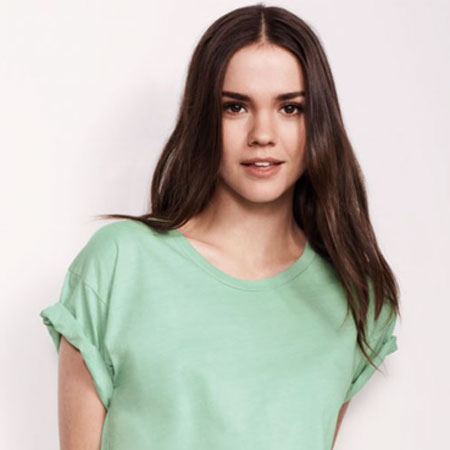 Maia Mitchell is an American actress and singer rose to fame following her breakout role in the TV series Mortified for the Nine Network. She is also mostly known for her work in Freeform drama The Fosters and Teen Veach Movie.

Maia is an elder sister to her only sibling Charlie. She grew up with her brother in New South Wales where her family lives.

In the year 2009, she also played as Taphony in an episode of K-9 titled Taphony and the Time Loop. In 2011, she again played the role of Natasha Hamilton in the series Castaway for 15 episodes.

Maia has played in a numerous television series which has added to her fan following. In 2013, she played Shaylee Michaels in Jessie in the episode ‘Jessie’s Big Break’.  Maia made her big break in the Disney Channel Original Movie ‘Teen Beach Movie’ where she played the role of McKenzie along with Ross Lynch, Grace Phipps, Garrett Clayton, and Jordan Fisher.

She completed another film called the ‘The Philosophers’ as Beatrice. Maia began acting in the series ‘The Fosters’ in 2013 and still is in the lead role as Callie Jacob.

Maia is famously known for her roles as Brittany on Mortified and Natasha on Trapped. She has been voicing in the animated television series The Lion Guard since 2016.

Maia Mitchell's Net Worth And Earnings

Maia Mitchell is one of the leading figures in the field of acting who has landed a number of breakout roles in various projects. She has an estimated net worth of around $3 million, as per celebrity net worth, in 2019.

Maia Mitchell has been dating Rudy Mancuso started since June 2015. Her boyfriend Rudy Mancuso is an actor and cinematographer, known for The Keys of Christmas, Tough Love and Shifty.

According to some online source, Mancuso confirmed his relationship with Maia via his Instagram post in March 2016. The couple is still sharing the strong bond of love.