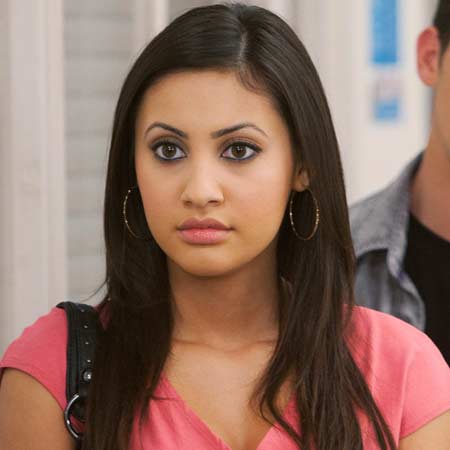 Gracia Allen Award-winning American actress, Francia Raisa is popularly known for her role as Adrian Lee-Boyewich, a 20-year-old girl in the TV series, The Secret Life of the American Teenagers. She received several nominations for her role in the series. Raisa who earned the role of Leti in Bring It On: All or Nothing is also cast as Ana Torres in 2018’s TV series, Grown-ish. Raisa not only came to limelight from her career but also came after she donated a kidney to her best friend, Selena Gomez.

Francia Raisa was born Francia Raisa Almendarez on 26th July 1988 in Los Angeles, California under birth sign Leo. Raisa is American by nationality and belongs to Mixed ethnicity (Mexican and Honduran descent). She is the daughter of Virginia Almendarez and Renan Almendarez Cello (American radio personality). Her parents raised her with three siblings, Irlanda Almendarez, Italian Almendarez and Cynthia Hernandez.

Raisa attended Bishop Alemany High School in California where she was a member of cheerleader squad. When she was young, she was into jazz and tap dancing. She was also interested in athletic hobbies like ice skating and karate.

She got into the entertainment field taking acting jobs, modeling opportunities and work in commercials.

Francia Rasia made her big screen debut in 2006 from the comedy film Bring It On: All or Nothing directed by Steve Rush. Rasia shared the screen with Hayden Panettiere, Rihanna, Solange Knowles and Gus Carr.

After working on her first movie, she took a break and made her comeback from the 2009 teen comedy film, Fired Up! starring Eric Christian Olsen, Nicholas D’Agosto, Sarah Roemer and Molly Sims.

Some of her other works include Bulletface, Chastity Bites, and Beyond Paradise.

In 2005, Raisa made her Hollywood debut from the TV series Over There. After two years, she appeared in two TV film, Shredderman Rules, and The Cutting Edge: Chasing the Dream. Subsequently, she worked in ABC’s teen drama The Secret Life of the American Teenager from where she grabbed huge fan following.

The Secret Life of the American Teenager

Raisa earned the role of Adrian Lee-Boyewich, a 20-year-old girl who has a reputation as a drama queen and school sl*t, in the drama series The Secret Life of the American Teenager.

Raisa shared the screen in the series with Shailene Woodley, Daren Kagasoff, and Megan Park. She was a s sociated in the series from 2008-2013 appearing in 121 episodes. Her role in the series helped her to win Gracie Allen Awards. She was also nominated for Teen Choice Awards, Image Awards, and ALMA Awards.

Some of her other works are In Plain Sight, CSI: Crime Scene Investigation, The Mindy Project, and Christmas Bounty and Once Upon a Date among others. As of 2018, she is working as Ana Torres in ABC spin-off series, Grown-ish with Yara Shahidi, Trevor Jackson, and Emily Arlook.

Grown-ish actress, Francia Rusia acc u mulated an impressive amount from her acting career. As per Celebrity Net Worth, Ruisa has an estimated net worth of $3 million. She earns a salary of $1 million from the TV series Grown-ish.

Francia Raisa is linked to American singer and actor Trevor Jackson as they usually share cute pictures of each other in their social media.

They, however, have not revealed anything regarding their relationship.

In 2017, Selena Gomez announced that she underwent a kidney transplant due to lumpus complication. Gomez also thanks Rasia for donating an organ to her.

After a successful surgery, Gomez uploaded a picture of the scar on her Instagram.

Rasia also uploaded a picture of her and Gomez sharing her experience on Instagram.

In an interview in 2018, she talked about her recovery and stated,

“It’s harder as the donor because we are losing something our body didn’t need to lose.’’

She has her mother’s name tattoed on the back of her neck.

Here is the video where Francia Rasia talks about the kidney transplant: