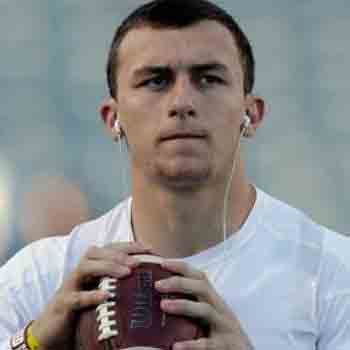 Jonathan Manziel is an American professional Canadian football quarterback currently plays for the professional football team Montreal Alouettes of the CFL. He also played two seasons for Cleveland Browns of the National Football League (NFL). Starting his professional career playing for the Texas A&M Aggies as a redshirt freshman, he later played for several reputed teams and has won a number of prestigious accolades.

Manziel is a married man exchanged the vows with his girlfriend Bre Tiesi in 2018.

Jonathan Manziel was born Jonathan Paul Manziel on 6 Dec1992, in Tyler, Texas, United States. He is the son of Michelle Manziel and Paul Manziel. He has two younger sisters who are studying in the high school. His great-great-grandfather was an immigrant from Lebanon to America. His family runs the Texas petroleum industry from which they earn their living and has become rich.

Manziel grew up playing a variety of sports but while studying at Tivy High School in Kerrville, Texas, he concentrated on baseball and football. Johnny Football performed classic in American football arena being applauded by sportswriters, coaches, and parents. He achieved the folk hero status is compared to the quarterbacks like Brett Favre, Michael Vick, and Drew Brees.

Manziel is also sometimes credited as “Johnny Football”. He is nicknamed as so by his fans and students at Texas A&M University before the start of 2012 season which was his debut year. The nickname has been his registered trademark to make him renowned in the American Football arena.

Studying at Tivy High School, Johnny Manziel was coached by Mark Smith. He played football all years during his high school. By the end of his first season at the high school, he played with the varsity team as a receiver. He started his fourth game at quarterback. During his senior season, he was honored and appreciated for his performance.

Manziel was highly recruited out of high school. He also received offers from several popular teams. He was named as NUC All World Game in 2010 where he rushed for over 100 yards and threw for over 200. It was the first time he dominated on the national stage. In 2011 season, he did not appear in any matches instead he made the travel squad after enrolling in the school.

He has the terrific scrambling ability. He has fearless confidence in the game and is physically and mentally tough. He has a knack for sustaining drives and possesses playmaking ability.

Jonathan Manziel's Net Worth And Salary

Through Jonathan Manziel's salary, endorsements deal with several renowned companies like Nike, and especially from his contract, a Canadian football quarterback has collected a large amount of money. As per The Richest, he has an estimated net worth of around $4 million, as of 2018.

Johnny Manziel is a young and energetic athlete with such impressive skills. Johnny is Christian by faith. is tall and handsome. A 25-year-old athlete is a married man who tied the knots with his longtime girlfriend, model Bre Tiesi in a private wedding ceremony in a California courthouse.  Despite he and his wife Tiesi have kept totally secret their marriage, the couple has been sporting rings on their wedding fingers since early 2018.

The couple started dating in late 2016 and got engaged in 2017 in Paris. They have posted a series of photos on their social media. He has more than 1 million followers on his Instagram account.

Manziel was also in a relationship with Colleen Crowley. Besides, he is likewise a good friend of popular rap artist Drake and NBA Superstar Lebron James.

This NFL superstar was arrested in June 2012 for his three misdemeanors- disorderly conduct, failure to identify and possession of a fictitious driver’s license.

Johnny Manziel has the height of 5ft 11 inch and weight is 95kg. He is a dynamic athlete with the passion for the game. 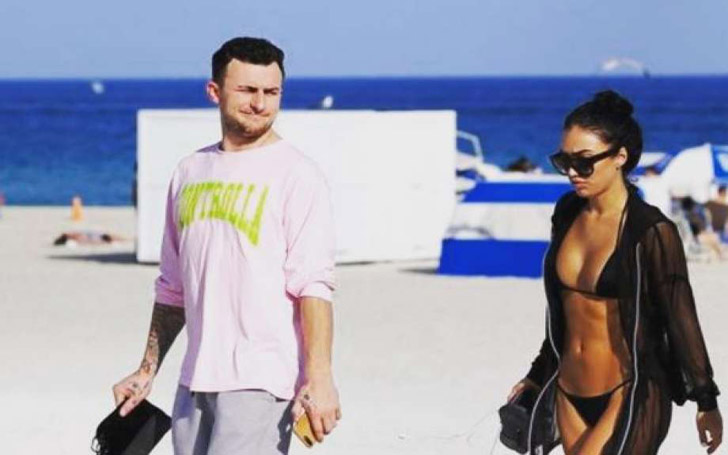