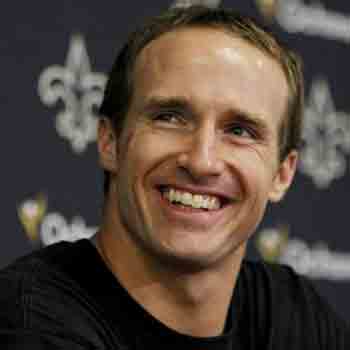 Drew Brees is a popular NFL player from Dallas.  He plays for the New Orleans Saints club as of 2019. He started his career in a college football league. Later, San Diego Chargers selected him with the first pick in the second round of the 2001 NFL Draft. In 2004, the player received the NFL’s Comeback Player of the year. He became the Offensive Player of the Year in 2008 and 2011.

Austin Born Drew Brees Grew Up Along With His Brother

Drew Brees was born on January 15, 1979, in Austin, Texas to parents Eugene Wilson Brees II (trial lawyer) and Mina Ruth (attorney). His full name is Drew Christopher Brees. Brees came from an athletic background. His father played basketball for the Texas A&M Aggies men’s basketball team whereas his mother was a former all-state in three sports in high school.

Bree’s parents went through a divorce when he was seven years old. After the separation of his parents, he and his brother Reid spent his childhood days turn by turn with their parents. Due to this situation, the two brothers became very close. He also has a parental half-sister, Audrey.

While at the middle school, Brees started playing flag football. Then in high school, Brees was a varsity letterman in baseball basketball, and football as well. Beers hold American nationality and regarding his ethnicity, he is White.

Since his childhood days, Drews's relationship with his mother was not good. But when their relationship was improving she attempt suicide which left Drew in major shock.

During his junior year, Brees overcame an ACL tear after which he was chosen as Texas High School 5A Most Valuable Offensive Player in 1996 and finally led his team; Westlake High School FT to a 16-0 record and state championship.

Brees graduated with a degree in industrial management in 2001 and was also a member of the Sigma Chi fraternity. Brees led his team; the Boilermakers to unforgettable last-minute upsets against Ohio State and Michigan. Brees is extensively remembered for his four interceptions and a 64-yard touchdown pass in the game.

Later, Brees turned out to be a finalist for the Davey O’Brien Award as the national best quarterback in 1999. Drew earned the Maxwell Award in 2000 as the nation’s outstanding player. In the same year, Brees also was fourth in Heisman Trophy voting.

Brees became the first Boilermaker since Bruce Brineman to earn Academic All-America honors. For a record three times, Brees won the Academic All-Big Ten honors thus was initiated to Mortar Board and was awarded the Big Ten Medal of Honor and NFF National Scholar-Athlete Award as well.

Drew Brees’ huge college career led him to be a mid-late first-round draft pick in the 2001 NFL Draft which he later slipped. Brees made his professional game debut on November 4, 2001, against Kansas City Chiefs. Drew joined the San Diego Chargers but his career with them was in grave danger after the Chargers acquired NC State’s Philip Rivers after the 2004 NFL draft.

The San Diego Chargers won the AFC West and thus Brees was selected to the 2004 Pro Bowl due to his performance. Drew Brees was also named the NFL Comeback Player of the year.

Drew finished third in the League with 26 touchdown passes and 11 interceptions and was named starting quarterback for the NFC in the 2007 Pro Bowl. He was named first runner-up for league MVP by the Associated Press on January 5, 2007. The same month, Drew made his first playoff for Saints where he had 1 touchdown and no interceptions against Philadelphia Eagles in the Louisiana Superdome.

Later he led the Saints to win over the Philadelphia Eagles. Brees finished this season establishing a new NFL record of a completion percentage of 70.62. Drew won the Super Bowl Most Valuable Player Award with a record of 32 pass completions. He is considered one of the greatest NFL players of all time.

Drew Brees' Net Worth And Salary

In the year 2014, the player made around $11 million from his endorsement deal with many well-known brands. In 2016, with the New Orleans Saints, Brees signed a contract for a tremendous amount of $60 million.

Drew was named AP Male Athlete of the Year on December 17, 2010. In the 2011 season with the Saints, Drew led the NFL in Triple Crown. Drew went on to break Dan Marino’s record for most passing yards in one season in the game against the Atlanta Falcons in New Orleans.

After his successful seasons in Saints, Brees signed a 5-year long contract with Saints for $100 million. In the 2013 Pro Bowl, Brees was selected after Robert Griffin III was replaced due to an injury. The Saints lost to Seattle Seahawks in the Divisionals which went forward to win Super Bowl XLVIII. Drew’s most recent season commenced with a loss against the Cleveland Browns.

Drew Brees married college sweetheart Brittany Dudchenko (born in Syracuse, Indiana) on February 8, 2003. The two commenced dating back in 1998 at Purdue and ever since have been together. the couple has founded the Brees Dream Foundation in 2003 which mainly aids in the fight against cancer. Drew and his wife bought and renovated a home in Uptown New Orleans where they live with their three sons and a daughter born recently.

The two commenced dating back in 1998 at Purdue and ever since have been together. the couple has founded the Brees Dream Foundation in 2003 which mainly aids in the fight against cancer. Drew and his wife bought and renovated a home in Uptown New Orleans where they live with their three sons and a daughter born recently.