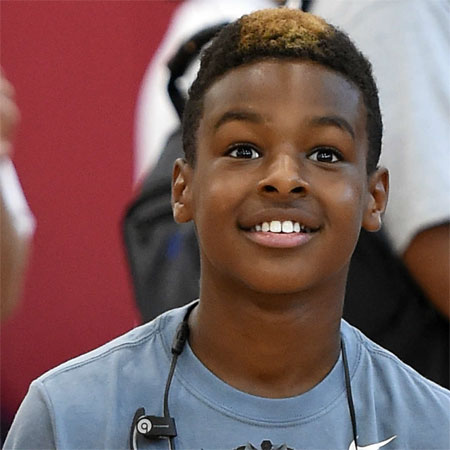 LeBron James Jr. is not only known as the son of LeBron James but also recognized for being a ridiculously good basketball player himself at such a young age. Also, James Jr. prefers playing as a point guard.

As far as his nationality is concerned, he is American and is of Afro- American ethnicity. His father being a basketball player, LeBron Jr. has always been an athletic kid ever since his childhood and got the attention of the media at the age of seven.

LeBron Jr. started playing basketball on the prep circuit and garnered major college interest nationally when he was just 9-year-old.

On the court, he prefers playing as a point guard and has always made his parents proud by scoring highest points in games just like his legendary NBA Most Valuable Player Awards winning father, LeBron James.

Playing AAU, he teamed up with top basketball players in his age group, his passing and shooting skills impressed everyone. He even was named in the Top 20 All-star team from the camp.

LeBron James Jr. as we all know is the son of a renowned basketball player, LeBron James and not to forget that his mother was also an athlete in her high school and played softball and was a cheerleader too.

His parents, LeBron and Savannah were high school sweethearts. Apparently, they started dating when they were only 16. James Jr. was born when his father was 19, and his mother was just 18.

He spent most of his childhood in Coconut Grove, as James Sr. was playing for the Miami heat. In November 2015, the family moved to Brentwood Los Angeles in $21 million East-Coast-style mansion.

Influenced by his father, he started playing basketball from an early age. Apart from his love for basketball, James Jr. also loves playing video games with his father and enjoys movie night with his family.

LeBron James, the father of LeBron James Jr., has an estimated net worth of $400 million according to Celebrity Net Worth.

And as stated by Forbes he earned around $86 million by the end of 2017 which includes a $31.2 million salary and a whopping $55 million in product endorsements.

In the first 10 season of the NBA, he earned just over $126 million in salary alone and later he earned an estimated amount of $326 million from his endorsements from 2016 to 2017.

Similarly, he also endorsed Beats by Dre, and he owned 1% of the company. Along with that he also received the total royalty payment of $1 million when he was a spokesman and when that company was sold to Apple for $3 billion, he took home around $30 billion, as reported by Celebrity Net worth.

He signed the deal with Nike when he was just 18-year- old. Over the period, he was paid around $90 million during his contract of seven years and also got $12. 8 million per year.