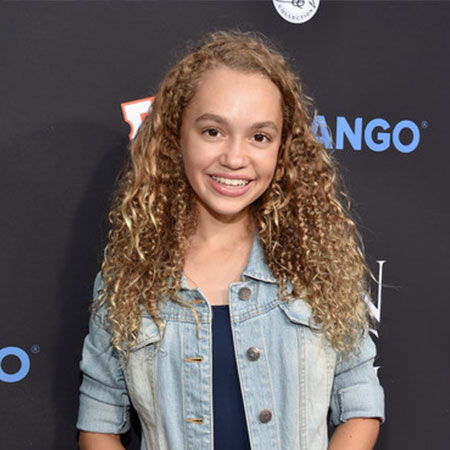 Jillian Shea Spaeder is an American actress and singer. She started to come to the limelight after she played a role in Nickelodeon's comedy series Nick, Ricky, Dicky & Dawn. As a singer, she released her first single Story in 2018 and released her second single Barely Changed in 2019.

Jillian Shea Spaeder was born on September 27, 2002, in Philadelphia, Pennsylvania under the zodiac sign of Libra. People who are of this zodiac sign are believed to be peaceful, fair, and sociable. Jillian belongs to white ethnicity and holds an American nationality.

Her father's name is Bill Spaeder, he is a software engineer. Her mother's name is Sharon Spaeder, she is a freelance writer. Her parents formed the cover band Crow's Feet along with Pat Doyle, Larry Clark, and Joe Ruggiero and they perform at different clubs and venues in Philadelphia.

She has an older brother Evan Spaeder and older sister Emma Spaeder. She went to Sugartown Elementary School for her primary education.

Jillian builds interest in music as her parents were involved in music. She started singing from an early age and she also developed an interest in acting. When she was in Sugartown Elementary School, she debuted on stage as Flea in the production of Cinderella: A Musical Panto at the People's Light & Theatre Company.

When she was at the age of 11, she met her manager at a performing arts seminar in Hollywood. After Jillian met her manager, she moved to Los Angeles with her parents. Jillian trained acting from private acting coaches and attended workshops at John D'Aquino's Young Actors Studio after moving to LA. Jillian also took some acting lessons at The Actor's Comedy Studio and Gray Studios.

CAPTION: An American singer and actor Jillian Shea Spaeder at the World Premiere of ROGUE ONE: A STAR WARS STORY SOURCE: Assignment X

She made her first appearance in television in an episode titled "Unhappy Campers" of Nickelodeon's comedy series Nick, Ricky, Dicky & Dawn as McKenna. In 2016, she appeared on a big screen in Marcus A Siler's directorial venture Theatre and Me's the Bully. Besides, she has also worked in Disney series.

Besides, Jillian and her older sister Emma have performed with their parent's band Crow's Feet. While performing with the band she covered the most popular songs of Billy Joel, Alicia Keys, and Adele.

What Jillian Shea Spaeder Does Besides Acting?

Besides acting, Jillian also works as a singer and songwriter. In 2018, she released her first single titled Story. After a year, she released her second single Barely Changed. She also worked as Bailey in Disney XD's Walk the Prank.

Jillian joined YouTube on November 22, 2014, however, she rarely uploads videos on her channel. As of 2019, her channel has about 3.4k subscribers.

Jillian Shea Spaeder has not disclosed her net worth to the media. As a child actress and singer, she has collected a decent amount of money. She started acting from her early age and till now she is known for her work in the series like Nicky, Ricky, Dicky & Dawn, and OMG.

Spaeder is 16 years old and she has already worked in some television series and movie. Even more, she has also released a song as a singer. According to the source, In the United States of America, a child actor earns between $1,166 to $3,403 weekly. Her exact net worth is not revealed in the media, however, we can speculate she has ama s sed a net worth of around $100 thousands.

Jillian also had a pet porcupine, she calls him a Kirpi, however, he pa s sed away as per some sources.

Jillian Shea Spaeder is not known to be dating anyone as of early 2019. She is just 16, so she might be taking her time to get into some kind of relationship. As of now, she lives happily with her family and siblings.

Looking through her Instagram, we can see that she is fond of traveling and trying new things with her friends.

She is active on social media including. As of January 2019, she has about 557k followers on Instagram and 6,352 followers on Twitter.

The video shown below, Jillian uploaded her video on her channel, where Jillian and her friend mashup all the popular songs of 2018.