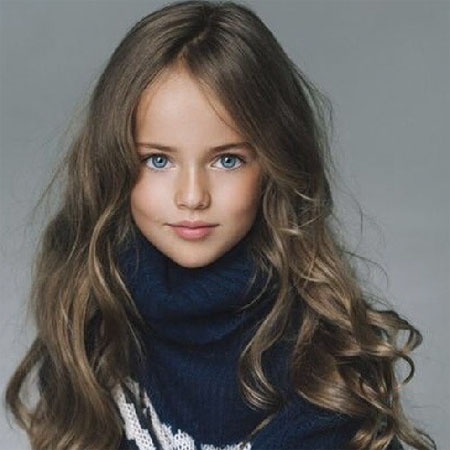 Russian child model and actress, Kristina Pimenova has performed as a runway model and was featured on the cover of Vogue Bambini, at the age of ten. She is known for her acting performances in several movies as well.

Pimenova has worked for popular brands such as  Armani, Benetton, Burberry, and Roberto Cavalli.

Kristina Pimenova was born on 27 December 2005, in Moscow Russia, under the birth sign Capricorn. Her birth name is Kristina Ruslanovna Pimenova. She is the daughter of Ruslan Pimenova, a soccer player and Glikeriya, who was once a model herself. She has an elder sister whose name is Natalia Pimenova.

After that, Kristina went to Los Angeles to pursue her modeling career. She belongs to Russian nationality and ethnicity wise she is white.

Kristina Pimenova started her modeling career when she was only 3 years old. In 2009, her mother arranged the photo session in Moscow studio for her. Her photos were so popular which gathered the attention of a modeling agency President Kids.

In 6 months Kristina was taught fashion show bases, acting skills, skills of behavior on a casting and in front of the camera. After Kristina’s success in the homeland, she was invited to the popular Italian model agency, and was passed all levels of “Motel Hell”. She achieved the stunning success and was awarded an unofficial title of “the children’s top model”.

Before hitting the age of 10, Kristina performed as a runway model and was featured on the cover of Vogue Bambini. She has now 1.8 million Instagram followers and also ranks among the most beautiful in the world.

Kristina Pimenove is also an actress, known for Creators: The Past (2016) and The Russian Bride (2017), and she worked alongside Lilly Kruk in a campaign for CA Mexico.

Kristina Pimenova's Net Worth, And Salary

Kristina has earned a huge amount of salary from her work, as she has already worked with big fashion brands such as Armani and Dolce & Gabbana. She has maintained an incredible net worth close to millions.

Has Kristina Pimenova Involved In Any Kind Of Relationship?

Regarding Kristina’s personal life, there is no question of her being married. Also, she isn't involved in any kind of affair because she is just a child now. She is focused on her career and study for now and is very young to make any boyfriend.

Kristina's mother manages her social accounts. There has been a criticism of the content as an example of the sexualization of an underage model.

Kristina’s mother, Glikeriya Shirokova is herself a former model, while her father is a former Russian international footballer who played for Russia in the 2002 World Cup. Her mother appeared in numerous fashion magazines in Russia.

She is the second child after her sister Natasha Pimoneva.

Kristina's parent-led her to make a model at the age of three. Kristina is active on social networking sites like Facebook and Instagram. She has a huge number of fan followers on her social accounts.

There is a huge rumor regarding her mother of manging her social media platform.  Most of the people have claimed her of promoting the sexualization of kids. However, her mother has disagreed with the statement saying that the picture are innocent.