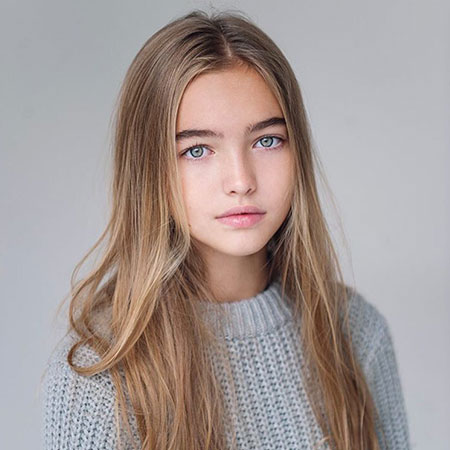 Born and raised in Moscow, Russia, Anastasia Bezrukova is a model as well as an actress. She started modeling at an early age and became the most in-demand child model in Europe. Besides modeling, she also got to make her appearance in some movies such as The Milky Way and You're Gone. Anastasia also starred in a music video for a project "Sleeplessness".

Anastasia Bezrukova was born on January 5, 2004, in Moscow, Russia under the zodiac sign of Capricorn. This zodiac sign defines her personality of self-control and has the ability to lead the way, make solid and realistic plans.

She holds a Russian nationality and belongs to mixed ethnicity. Anastasia's father Dmitry is a lawyer while her mother Svetlana is an entrepreneur. Similarly, Anastasia has a younger sister, her name is Varvara.

Anastasia Bezrukova developed her interest in modeling at her very young age. When she turned 10 years old she was already one of the most in-demand child models in Europe. She even did modeling for famous brands such as Benetton, Pinko, Moschino, and Incanto.

Her photo was also featured in magazine publications in both Italy and Russia, including Vogue Bambini, Kollezioni, and Harper's Bazaar. Besides modeling, in 2016, she debuted onscreen in one of the lead roles in Anna Matison's movie The Milky Way.

On the same year, she made her appearance on a movie After You're Gone which was directed by Anna Matison. For her role in Anna's movie, she took dance lesson form choreographer Radu Poklitaru and acting lessons from Moscow's Bolshoi Theatre ballet dancer Yan Godovsky. Anastasia also starred in a music video for a project "Sleeplessness".

Anastasia Bezrukova has not revealed her net worth to media yet. As a young model, she has collected a certain amount of fortune. As modeling, she has worked with many brands such as Benetton, Pinko, Moschino, and Incanto.

Her modeling photo has been featured in magazine publications in both Italy and Russia. Besides modeling, she was able to make an appearance on some movies such as The Milky Way, You're Gone. To talk about how much model earns, an average salary of the model is around 32,000 to 48,000 based on levels of tenure.

A post shared by Anastasia Bezrukova (@anastasiabezrukovaofficial) on Dec 20, 2017 at 6:31am PST

She loves animals especially dogs and owns two Chihuahuas pet dog. Whenever she gets the free time she always spends her time playing with them.

Anastasia Bezrukova age of 15 years (2019) is currently single. She is very busy with her modeling career along with acting. For modeling, she has gone to many countries that include China, United Kingdom, Estonia etc.

A post shared by Anastasia Bezrukova (@anastasiabezrukovaofficial) on May 13, 2018 at 6:00am PDT

Anastasia is active on Instagram, as of January 2019, she has about 273k followers and also has a YouTube channel, she joined YouTube on October 26, 2011, but she rarely uploads the video on her channel.