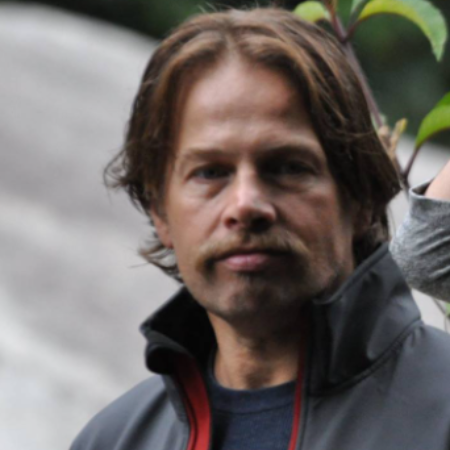 James LeGros is an American actor who started his career professionally in 1984. He is most known for his role in the film Living in Oblivion, for which he was nominated for the Independent Spirit Award for Best Supporting Male. Moreover, his notable television series are Mercy, Mildred Pierce, and The Mosquito Coast.

When And Where Was James LeGros Born?

James LeGros was born James Mervyn LeGros on April 27, 1962, in Minneapolis, Minnesota, the United States. His father was a real estate agent, whereas his mother was a tutor.

For his education, he attended the University Of California Irvine. He holds American citizenship and is of White descent. He stands at the height of 5 feet 7 inches or 1.76 m.  As of this writing, he is 59 years old.

Net Worth In 2021, Earnings, And Career Details

The 59-year-old actor owns an estimated net worth of $3 million as of July 2021. Most of his part of income comes from his career in acting.

LeGros acted as Roach in the action crime film Point Break (box office collection $83.5 million and budget $24 million) in 1991. He appeared as Dr. Max Rocher in the NBC medical drama ER in 1998.

He landed the role of Chad Palomino in the film Living in Oblivion (budget $500,000 and grossed $1.1 million), for which he was nominated for the Independent Spirit Award for Best Supporting Male.

Some of his other films and TV series are The Low Life, Destiny Turns on the Radio, Enemy of the State Just Looking, and L.A. Doctors.

From 2000-2001, he played the recurring role of Mark Albert in the FOX series Ally McBeal. In 2005, he appeared as Special Agent Raymond "Ray" Fuller in the Showtime drama Sleeper Cell.

The actor starred as Dr. Dan Harris in the NBC medical drama television series Mercy from 2009-2010. He joined the cast of the crime drama TV series Justified from 2011-2014.

He acted as Karl Hootkin in the drama film Big Miracle (box office $24.7 million and production cost $40 million) in 2012.

His other notable movies and TV series include Phoenix, Oregon, Emperor, Hunters, and Blue Bloods. Currently, he plays Agent Don Voorhees in The Mosquito Coast alongside Justin Theroux, Melissa George, and Kimberly Elise.

Who Is His Wife? Does He Have Any Child?

'Living in Oblivion' star has been married to late actor Robert Loggia's daughter Kristina Loggia since 1992. By profession, her wife is a photographer.

Since the marriage, the couple has share two sons, including their son Noah LeGros, who is also an actor.