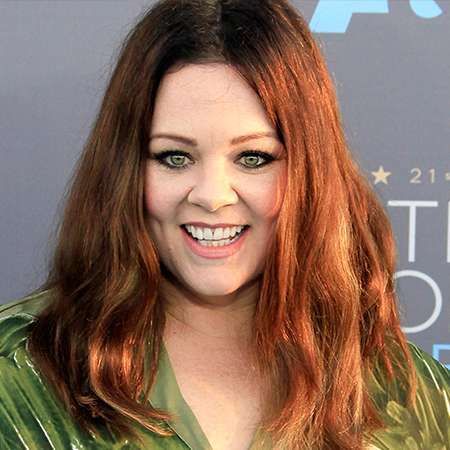 Melissa Ann McCarthy is an American actress, fashion designer, comedian, writer, and producer, well known for her appearance in television and films in the late 1990's, also gained national recognition for her role as Sookie St. James on Gilmore Girls.

McCarthy was born on 26 August 1970, in Plainfield, Illinois, U.S, to Sandra and Michael McCarthy. She is also a cousin of actress and model Jenny McCarthy and professional basketball player Joanne McCarthy.

She was raised on a farm in a large Catholic family. Her father is of Irish descent, whereas, her mother is of English, German, and Irish Ancestry. Some of her ancestors were from County Cork.

Melissa's career started as she began performing as a stand-up comedian in Los Angelos, and later in New York City.

She made her first television appearance in an episode of the NBC comedy series Jenny, opposite to her cousin Jenny McCarthy. Later McCarthy made her feature film debut in a minor role in the 1999 comedy Go.

Later in the year 2007, she starred opposite Ryan Reynolds in the science fantasy psychological thriller The Nines. After her successful work, on September 20, 2010, McCarthy was cast in a leading role on the CBS sitcom Mike & Molly.

McCarthy had her breakout performance in the comedy movie Bridesmaids alongside Kristen Wiig, Maya Rudolph, and other famous stars.

Later in 2013, Melissa co-starred with Sandra Bullock in the Buddy Cop comedy The Heat. After that, she co-wrote the script of the movie Tammy.

McCarthy has also produced a CBS pilot who started her husband, Ben Falcone, as she played the female lead, opposite Bill Murray, in 2014 comedy film St. Vincent, directed AND written by Theodore Melfi.

Her another popular appearance in the year 2016 was in the movie The Boss, which is a comedy film based on a character which McCarthy had created in the Los Angeles Groundlings.

She has done many movies and series till date as, recently, she made a surprise appearance on Saturday Night Live portraying White House Press Secretary Sean Spicer.

Melissa McCarthy is a married woman. She married her longtime boyfriend, Ben Falcone who is an actor and alumnus of the Groundlings, on October 8, 2005.

The couple has two children together, Vivian, born on May 2007 and Georgette, born on March 2010. McCarthy's pregnancy with Vivian was written into the last season of Gilmore Girls.

Melissa McCarthy has made an enormous amount of money from her various successful career as actress, writer, producer as her total net worth is estimated to be $50 million. She resides in a $4 million house in Los Angeles.

Forbes Listed her in the top 10 Highest paid Actress 2017