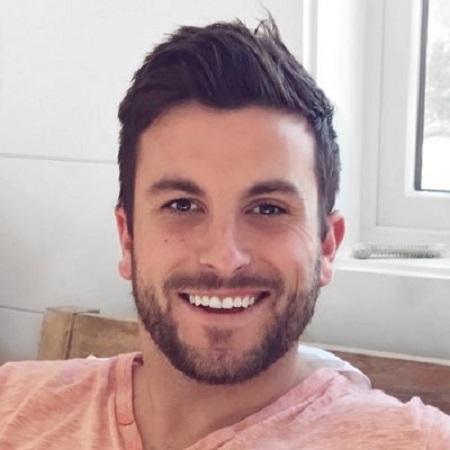 Tanner Tolbert is a television star best known for competing on the 11th season of The Bachelorette to win the hearts of Kaitlyn Bristowe and Britt Nilsson. He has also appeared on the second season of the ABC hit series Bachelor in Paradise.

Tanner Tolbert was born on May 2, 1987, in Kansas City, Missouri, the United States of America, to his father Stephen Andrew Tolbert and mother Karin Barragato.

He was raised along with his sister Kara Tolbert. He is of American nationality and belongs to white ethnicity. He is 6 feet 3 inches tall. He had started his Nutrisystem journey in January 2018 after which he lost 16 lb weight.

As for his education, Tolbert attended the University of Kansas from where he completed his graduation with a degree in sports management in 2010.

Career: Competed on The Bachelorette and Bachelor in Paradise

Tanner Tolbert competed on The Bachelorette season 11 to win the hearts of Kaitlyn Bristowe and  Britt Nilsson. He competed on the show along with Nick Viall, Ben Higgins, Joe Bailey, Ben Zorn, Shawn Booth, Chris Strandburg, Jared Haibon and many more.

He and two other contestants Ben and J.J. Lane were eliminated in the sixth week. Booth became the winner of that season while Viall and Higgins became the first and second runner ups respectively.

Despite his elimination on The Bachelorette, Tolbert was invited to compete on the second season of Bachelor in Paradise. He won the season and successfully became engaged to model Jade Roper on the finale of the show.

As we mentioned earlier, Tanner Tolbert and Jade Roper became engaged on the finale of the season 2 of Bachelor in Paradise.

He popped the question in a very romantic way. Here's the clip from the romantic proposal, enjoy watching.

The husband-wife duo welcomed their first child, a baby girl, in August of 2017 and they named their daughter Emerson Avery.

Later January 2019, the pair announced that they were expecting their second child, a baby boy. They welcomed an adorable son on July 30.

Tanner Tolbert is a successful television star and Bachelor in Paradise winner and of course, he has earned a huge amount of money from the Bachelor Nation.

According to the Celeb Vogue website, the 32-year-old TV star has an estimated net worth of $1 million. According to a former Bachelor Nation member, Reality Steve a.k.a Stephen Carbone, stars on the Bachelorette make around $100,000 per season.

The winning prize of The Bachelorette is reportedly $250,000.