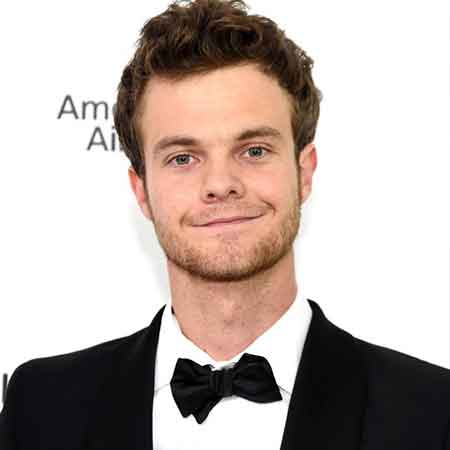 Unlike other children who usually spent time, playing games and having fun, Jack Quaid spent time on film sets. Being the son of renowned Hollywood celebrities, Dennis Quaid and Meg Ryan he was interested in acting since childhood. He often followed his parents on the set of their movies, learning the craft from a very early age. Following his parents' path, Jack Henry Quaid made his acting debut in 2012 in the science fiction film The Hunger Games as Marvel. Similarly, Quaid is also known for his performance in Vinyl as Clark Morelle.

Jack Henry Quaid was born on April 24, 1992, in Los Angeles, California, USA to actress Meg Ryan and actor Dennis Quaid. He was born under the birth sign Taurus.  His parents who married in 1991, later on, divorced in 2001.

Jack was only five when his folks divorced and obviously it affected his childhood.

“It’s one of those weird ages for your parents to get divorced. You’re old enough to know what’s going on, but young enough to be kind of naïve about it. It’s a whole deal.”

“It’s hard to ignore when you’re at a grocery story and you’re checking out and you look at [magazines], and there’s a photo of them with a little paper rip graphic between them. It’s a hard deal.”

He, however, does not have any regret growing up like that. He further said:

“I acknowledge fully the way that I grew up was not normal. But at the same time, it was normal in the sense that despite what my parents do, they are still a mom and a dad. It’s not like they are their characters at the dinner table or anything like that.”

His grandfather, William R. (Buddy) Quaid was also an actor and he is the nephew of Academy award-winning actor Randy Quaid. Similarly, his younger half-brother Budd Quaid is also an actor.

Fun fact: I have always been Buzz Lightyear. #tbt

Regarding his academic qualification, Jack Quaid joined New York University Tisch School of the Arts for three years. While he was the student of the University he was a member of the sketch comedy group Hammerkatz.

Quaid began his career in the film The Hunger Games which was based on the novel of the same name by Suzanne Collins. He portrayed the character Marvel and was able to win hearts of many by his performance.

In the same year, he teamed up with Eve Hewson, daughter of Irish rocker Bono, for the movie Roadies which he funded through the crowdsourcing website Indiegog.com.

He is also best known for his short-lived HBO television series Vinyl, where he appeared in a lead role in 2016. Again in October 2017, he played a role of Jordan Welch in the horror comedy film Tragedy Girls. He also worked with his mother in her directorial debut, Ithaca.

As of 2018, he appeared in action-adventure movie Rampage alongside Dwayne Johnson, Malin Åkerman, Jeffrey Dean Morgan, and Naomie Harris. And in the March 2018, Deadline had announced that Quaid will appear on the Amazon drama series, The Boys as Hughie.

Furthermore, he has worked with directors which include Martin Scorsese and Steven Soderbergh and shared the screen with A-listers like Channing Tatum, Katie Holmes, Jennifer Lawrence, Tom Hanks and many more.

Jack Quaid has appeared in various movies as well as tv series and has amassed a decent amount of money from his career. However, his net worth and salary are not estimated and is still under review. An average salary of the movie actor in the USA is $10.83 per hour whereas the average salary of the television star is $55K per episode. Considering his success and hard work we can assume that his net worth is in millions.

His parents, both Dennis and Meg have a staggering net worth of $40 million and $45 million respectively.

The young and good looking actor Jack Quaid is single and unmarried as of 2018. He has kept his private life under the radar so, there is no any information regarding his love affairs, girlfriends, dating history.

He might be dating someone but the information regarding it is not disclosed to the public and media. But as per recent Instagram posts, he is very close with a girl name Lizzy McGroder. However, he has not confirmed their relationship officially.

2 years with this cute-ass vegan. @scootermcgroder I love you dude.