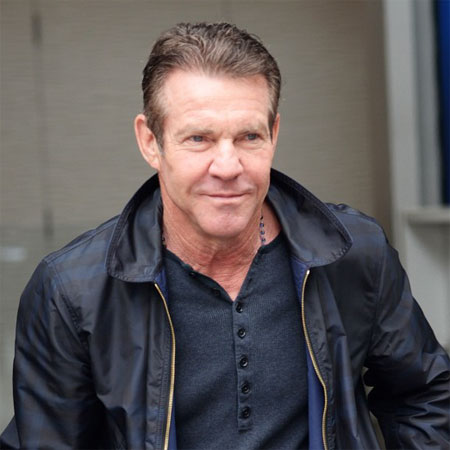 Dennis Quaid is a famous American actor, known for his portrayal as Mike in 1979 American coming of age comedy-drama film, Breaking Away. He is also well-known for his memorable performances in the movies Traffic, The Rookie, Frequency, The Parent Trap, The Day After Tomorrow, and Far from Heaven.

Quaid is also a musician, & plays with his band, 'The Sharks.' He married twice in his life and had three children.

Dennis Quaid was born as Dennis William Quaid on 9th April 1954, in Houston, Texas, United States. He is of mixed ethnicity(English, Scottish, Irish, and German) and holds an American nationality.

Talking about his education, he joined Bellaire High School and later on joined the University of Houston but dropped out from there. Following the drop out he moved to Los Angeles just to started his career as an actor.

Dennis Quaid began his acting career with a small role, Bellhop in 1975 American action/comedy film, Crazy Mama. After that, he appeared in a minor role in I Never Promised You a Rose Garden (1977).

Quaid made his television acting debut as Scott Martin in the episode of Baretta (1977). He got his big break with the movie, Breaking Away as Mike in 1979.

The film-makers & audience hugely appreciated Quaid's performance in the movie. He came in the notice of prominent producer & directors after he played Gordon Cooper in The Right Stuff (1983). Since then, Quaid has appeared in more than eighty movies and TV films.

In the year2000, Quaid was nominated for the Blockbuster Entertainment Award for Favorite Actor Suspense & Saturn Award for Best Supporting Actor for his role in the movie, Frequency.

Quaid was nominated for more than eight different awards for his role as Frank Whitaker in Far from Heaven (2002). His role in the TV film The Special Relationship (2010) as Bill Clinton earned him five different awards nominations. His recent movies are Truth (2015) & A Dog's Purpose (2017).

Dennis Quaid Several Relationships; Who Is His Current Partner?

Dennis Quaid married and divorced three times in his life. His first wife was an American actress, P.J. Soles, with whom he tied the knot on 23rd November 1978 after dating each other for a few years. They divorced on 23 January 1983.

After he divorced his first wife, Quaid began dating, Lea Thompson, an American actress in late 1983 & they got engaged in 1984. They stayed together for three years and got separated in 1987.

After that, Quai dated Meg Ryan, an American actress for a few years and they got married on 14th February 1991. After being together for more than ten years, they divorced on 16 July 2001.

During their long married life, Quaid and Meg have had a son, Jack Quaid, who is a famous actor of the present time. After that, Quaid had an affair with several other actresses, Andie MacDowell, Shanna Moakler, Cynthia Garrett & Anna Poche from 2001 to 2003.

In 2004, Quaid began dating an American Business Professional, Kimberly Buffington and married on 4th July 2004. They together had a daughter, Zoe Grace Quaid, and a son, Thomas Boone Quaid.

After being together for more than a decade, the pair filed for divorce in 2016 & the divorce was finalized in next year. After the third divorce, he again began dating model, Santa Auzina since July 2016.

The 65-year old actor Dennis Quaid confirmed his engagement Laura Savoie, on 21 October 2019. The 26-year-old Savoie is a University of Texas Ph.D. student. She is from St. Louis, Missouri. Quaid and his fiance Laura have yet to reveal when they met and how it all started.

The couple announced their engagement making a red carpet appearance at the YouTube premiere of the doc u mentary The Gift: The Journey of Johnny Cash. The actor popped the question to his girlfriend, in October, in Hawaii.

Throughout his long successful career, Dennis Quaid has acc u mulated a net worth of $30 million. However, his salary is not revealed yet. His exact salary is not mentioned but he received $60,000 from his appearance in Playing by Heart.

He also gets $750,000 as a settlement from the hospital who gave overdose blood to his twins.

The actor currently resides in a mansion located in Pacific Palisades, Los Angeles, California for which he paid $3,100,000. His house has featured four-bedroom.