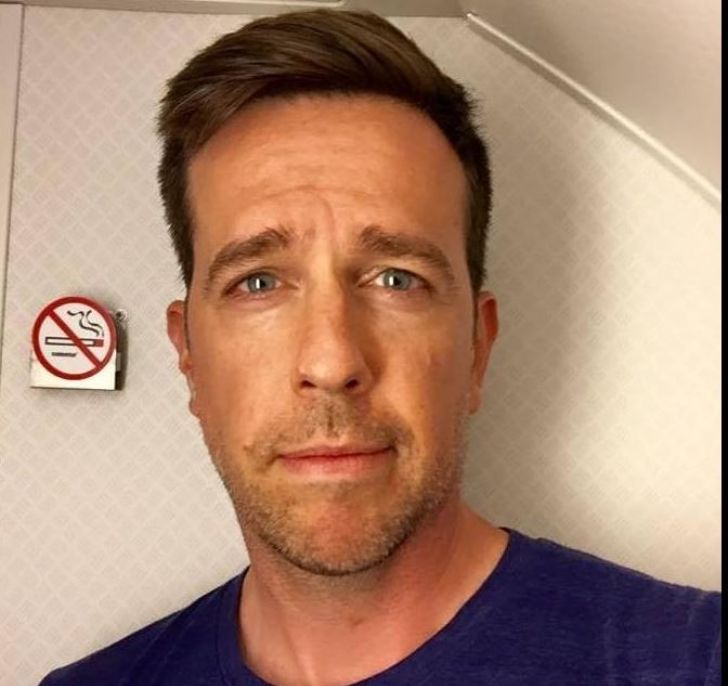 American-born Ed Helms excelled as a diverse talent as actor, comedian, and singer, ever since his professional career journey in 2002. Widely popular for portraying paper salesman Andy Bernard in The Office (2006-13), Helms added further on-screen prominence as Stuart Price in The Hangover trilogy. It's all thanks to his days as a correspondent in The Daily Show (2002-09) that opened his path to prominence and on-screen exposure.

Aside from acting, he has good taste in music as well; he along with his Oberlin College mates (Ian Riggs and Jacob Tilove) formed a bluegrass band The Lonesome Trio.

Ed Helms was born on January 24, 1974, in Atlanta, Georgia, the USA. His full name is Edward Parker Helms. He is the youngest of 3 children to Pamela Ann, a school administrator in a school, and John A. Helms, a Navy veteran who then professionally worked as a lawyer and insurance executive.

He has a brother named John Paxton Helms and a sister Susan Carol Helms.

Helms is an American by nationality and has a diverse ethnic background- has  English, Irish, German, Dutch, and French.

At the age of 13, Ed underwent an open-heart surgery that lasted for 9 hours to correct a severe congenital heart defect- described as supravalvular aortic and pulmonic stenosis.

After attending Interlochen Center for the Arts and The Westminster Schools, Ed enrolled at Oberlin College for a geology major but later would go for B.A. in film theory and technology and graduated in 1996. Moreover, as an exchange student, he spent a semester at New York University's Tisch School of the Arts.

After his graduation, he moved towards his professional career, and him during the very early phase used to work as a writer as well as performance. Helms also started his comedy from the stage performances within New York City. One after another he started gaining success in his work with a high ratio of achievement.

Helms is a recipient of an honorary Doctor of Fine Arts from Knox College.

Still, he is popular with his trademark as singing in his roles in the films as well as appearances as meek at first and straight, in the end, is very close to his fans.

He is a very well-known actor who started his career with the TV show in 2002, he worked on the show for the next 7 years and only left it in 2009.

He then played the role of Bradley Wallace in Cheap Sheets. Then after a few minor roles, he got the chance to play Andy Bernard in The Office (2006-13) where he worked alongside Steve Carell, Angela Kinsey, Leslie David Baker, Phyllis Smith, and Melora Hardin.

He debuted on film with Blackballed: The Bobby Dukes Story in 2004. Then in 2006, he worked in the Ben Stiller comedy flick Night at the Museum.

Then after several roles on the big screen, he got his first role in a major film as Dr. Stu Price in The Hangover trilogy (2009, 2011, and 2013). He was given one of the main roles and lit up the screen alongside Zach Galifianakis, Bradley Cooper, and Ken Jeong in the franchise.

How Much Is Net Worth Of Ed Helms?

According to Celebrity Net Worth, Ed Helms has an estimated net worth of $25 million as of 2021. The active years of ED started from the year 2002 and to date, he is very sincere in working across the industry. No doubt, his dedication in acting earned him millions of dollars.

Most often he is remembered for his character Andy Bernard in The Office, which allegedly got him a check of tens of thousand dollars per episode. Furthermore, he portrayed Stuart Price in the comedy hit trilogy The Hangover; the films made a collective box-office collection of more than $1.4 billion.

Throughout his career, Helms marked commercials for brands like Lycos, Burger King, Doritos, Hotels.com, Sharp, and many others. In addition to that, he is the owner of the production company, Pacific Electric Picture Company, launched in 2013. These became his other sources of income.

The Atlanta, Georgia-born prefers to keep his personal details pretty low as possible. No wonder why his Instagram account (@edhelms)  with over 1.1 million followers has limited posts about his family- let alone his love life.

While working on-screen, he had matchups with the likes of Amanda Seyfried in The Clapper (2017), Angela Kinsey, Eleanor Seigler, and Ellie Kemper in The Office (2005), and Christina Applegate in Vacation (2015). However, none of the connections were romantic in real life.

So far, no report on Helms' dating life or girlfriend ever came up. He is not reported to be married officially currently or ever had any wife in the past. Ed Helms walking across the late 40s has kept his relationship status pretty low. Currently, he lives in Los Angeles, California.