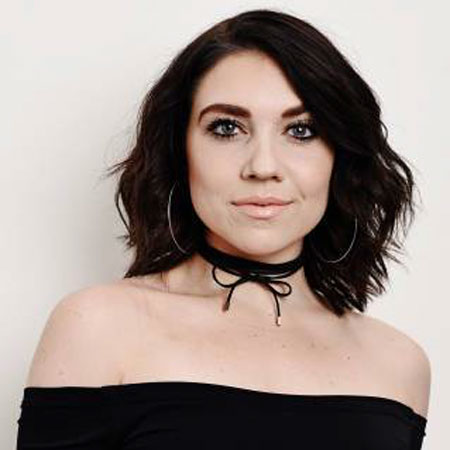 American ballroom dancer, Jenna Johnson was the top 8 contestant in the dance show, So You Think You Can Dance. Started dancing at the age of 3, she emerged as a professional dancer in the troupe on Dancing with the Stars. She is a five-time U.S. National Latin Champion U.S. National Youth 10 Champion, and a three-time National Contemporary Winner. Regarding her personal life, as of 2018, she is dating Valentin Chmerkovskiy.

Jenna Johnson was born Jenna Michelle Johnson on April 12, 1994, in Utah, the U.S under the birth sign Aries which defines her personality enthusiastic, energetic, and upbeat. As far as her ethnicity, she belongs to White American and holds the American nationality.

At the age of three, Johnson started dancing and took training in different dance styles like hip-hop, tap, ballroom, and ballet among others. She won US National Latin Champion five times and won US National Youth 10 Dance Champion. She represented her country at the World Latin Dance Champions in 2012.

Jenna Johnson started her professional career as a dancer. Johnson was a contestant on the season 10 of So You Think You Can Dance. She was eliminated on August 20, 2013. She was paired along with Tucker Knox, a contemporary dancer. She was specialized in Latin Ballroom.

On August 20, 2013, she was eliminated from the show. After three years she again came back to So You Think You Can Dance: The Next Generation and was one of the choreographers and mentors.

What a night. First off... incredibly tough week. Fighting no sleep, limited rehearsals, and the freaking Quickstep. I’m so proud of my @adaripp for pushing through and keeping a smile on his face. Second, I am just now getting through all of the sweet posts, texts, tweets, and messages we have received from our performances last night! Thank you all for keeping us safe.... so grateful for the love and support!! #teamjustfriends

The proficient dancer was a member of a troupe of Dancing with the Stars from Season 18 to 22. In 2016 there was a rumor that she would be a pro on the next season which turned out to be the reality.

Along with her partner Jake T.Austin, she became a professional dancer on the Season 23 of Dancing With The Stars. Moreover, she worked as a partner of James Hinchcliffe when his real dance partner, Sharna Burgess was injured. Being a troupe member she again returned back to the season 25 of the show.

The amazing dancer, Jenna Johnson has an estimated net worth not less than $1 million. She appeared in several dancing shows from where she earns a good amount. As per some sources, a reality star averagely earns a salary of $200k.

Similarly, she was a participant on the reality dance show So You Think You Can Dance, and as per the sources, the contestants of the show usually receives $500 per week. Likewise, she was also a part of the show Dancing With the Stars, and our sources revealed that the contestants' salary increases from the $125,000 mark. For example, if a contestant is paid $10,000 extra per week for weeks 3 and 4 for the 5th week, he\she will be paid $15,000. By the week 10 and 11, they will be paid around $50,000.

Jenna Johnson is not married yet. She is pretty uptight about sharing her personal details to the outer world. She is focused on making her professional career strong rather than building her love life.

Johnson was in a relationship with a fellow dancing pro boyfriend, Valentin Chmerkovskiy from early 2017. The couple has attended the 2017 Industry Awards and Cancer Benefit Show. On 15th June 2018, the duo announced their engagement via Instagram.

I knew the moment I met you, you were the man of my dreams and I wanted to be with you forever. Babychka ??? ?????? thank you for making my fairytale come true today! Cannot believe I get to call you my FIANCÉ!!!! #engaged

They seem to be happy together and there are no rumors about their breakups and any extra affairs.

Here is the video where Jenna Johnson told about her engagement: