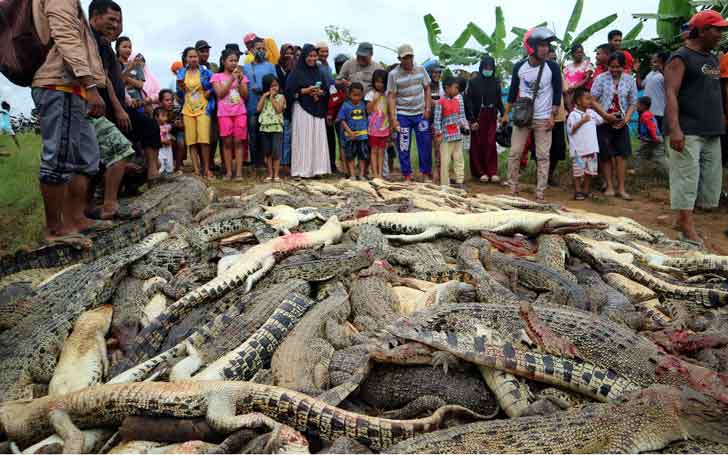 A group of villagers in an Indonesian village, West Papua killed around 300 crocodiles in revenge after one of the reptiles killed a local man at the breeding farm.

The irate villagers armed with knives, hammers, shovels, and clubs slaughtered 292 crocodiles on Saturday, July 14, after the funeral of the local boy who was killed on Friday.

Photographs provided by the Antara News Agency revealed the bloodied crocodiles in a huge stack in Sorong district of the Indonesian province of West Papua.

The man was killed by one of the crocodiles on Friday morning while collecting vegetables on the crocodile farm's breeding sanctuary. The head of Indonesia's Natural Resources Conservation Agency in West Papua said in a statement,

An employee heard someone screaming for help, quickly went there and saw a crocodile attacking someone.

The local media reported that the angry crowd attacked the office of the farm before slaughtering all 292 reptiles at the reserve.

CAPTION: 292 crocodiles at an Indonesian sanctuary killed by a mob of villagers SOURCE: Getty Images

Basar Manulland, the head of the area told the sanctuary had been operating on a license to breed the endangered saltwater and New Guinea crocodiles since 2013. Manullang further revealed there was a condition that the reptiles would be breed until they didn't disturb the society. He said,

He assured his agency would be supporting the police in their further investigation. "Crocodiles are God's creature that needs to be protected too," said Mr. Manullang.