Ever since Emilia Clarke got a breakthrough in the entertainment industry as Khaleesi & Mother of Dragons in the Game of Thrones (2011- 2019), the English actress, along with fame also got showers of rumored relationships. After denial of the claims, Clarke's off-screen love life revelation indeed is the 'breaking news' for the media.

Moreover, earlier in 2019, the news of Clarke's break-up with her alleged boyfriend Charlie McDowell, a film director, broke out. So, a mass of fans is speculating about her current relationship, let's know the fact.

Despite such huge media attention, the English actress is quite successful to keep her relationship status low-key. Ever since Emilia Clarke talked about her break-up with Seth MacFarlane (dated 2012- 2013) publically in 2016, the Game of Thrones star has remained mum about her relationship update.

Seems, as of November 2019, the 5 ft. 2 inches personality is single. She appeared solo in the  15th annual TIME 100 gala on April 23, 2019; indeed the red carpet moments have been an eminent way of love-life exposure for many celebrities. 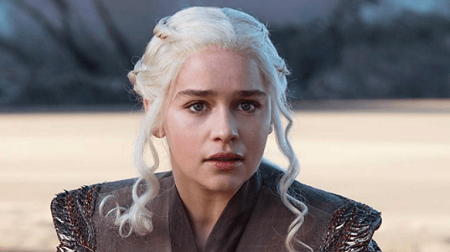 CAPTION: Emilia Clarke best known for her portrayal of the mother of dragons-Daenerys Targaryen on the hit BHO show Game Of Thrones is reportedly single as of late 2019.  SOURCE: Her

After the English actress appeared opposite actor Henry Golding in the 2019 romantic-comedy movie 'Last Christmas', many were fascinated to know if Emilia made a move in a relationship with the actor. But seems, with Golding, it halted at the point of friendship.

In fact, the Crazy Rich Asians actor is married to wife Liv Lo for 3 years since 2016.

Professional since 2009, Emilia Clarke's romance not only stopped in Game of Thrones but also appeared in the romantic drama film Me Before You (2016) & later in comedy-drama Last Christmas (2019).

In the movie Last Christmas, she plays Katarina "Kate" opposite Henry Golding (who played Tom) whom she falls in love with. The film plot revolves around the room-kicked Kate and Tom who rides a bike and volunteers at a homeless shelter; Emilia's character's meet-up with Tom grows a feeling of love though he denies her proposition of relationship.

Later, Kate goes on her owns & works caring for her health & again meets Tom and tells about her illness & heart transplant while Tom disappeared for a while. Again, her idea of the relationship gets shut down.

Nevertheless, Kate goes on her own again & finally gets over her illusion on Tom's reality.

Back in 2018, many online sources cited that Emilia Clarke was in a relationship with film director Charlie McDowell. On her 32nd birthday, the English actress posted a photo on Instagram depicting a shadowy figure kissing at a beach.

And as for surprise, McDowell also posted the same photo on his Instagram.

Well that was a birthday I won’t be forgetting in a while.

In May 2019, as per Cheatsheet, McDowell unfollowed Emilia on Instagram & later in September 2019, many online sources including Cosmopolitan stated about their quiet break-up.

Well, the English actress never confirmed her relationship officially except some friendly gestures with the director on social media.

Without a doubt, Clarke's beauty is undeniable alluring & many get fascinated with her charming personality. Even more, her on-screen romance seems too realistic that fans are not behind with comments about her reel-life relationship to be true. 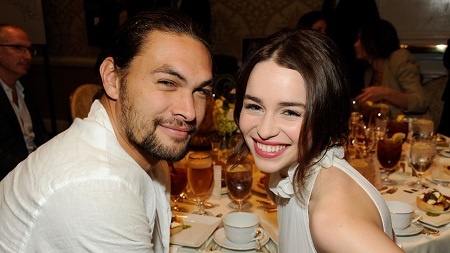 CAPTION: There were few reports of Emilia Clarke dating her on-screen husband Jason Momoa which was denied by both the couple.  SOURCE: Bustle

In addition to that, the Mother of Dragons, despite being an aunt to Kit Harington's character Jon Snow, made a separate fan-base as an adorable couple. Their kissing photo during the Rolling Stones Photoshoot in 2012 added in spice to their possible off-screen relationship.

However, all these romance were limited within the screen of Game of Thrones as they all are good friends in reality. Emilia often shares a post with her friends on social media & Jason Momoa being in the frame is not unusual.

Wait..... did I NOT tell you guys?! Um yeah. Now if he'd only bend the bloody knee there'll be no problems..... #modragonsmoproblems #igot99problemsandjonsnowisone #whichroundsmeupto100problems #youknownothingjonsnow

As for a fact, Clarke is good friends with Harington's wife Rose Leslie- they went to girls' trip in India in August 2019 & made highlights after mischievous monkeys blind robbed them.

Back in 2012, Emilia was in a relationship with Family Guy creator Seth MacFarlane, the now-former couple dated for a year before calling quits in 2013 & later dated James Franco briefly in 2013.

Moreover, she was in relationships with Cory Michael Smith (2014) and Jai Courtney (2015).