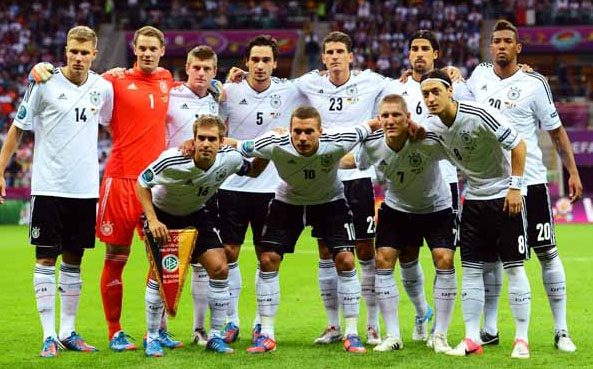 The Team Eagles with its powerful poseture as the emblem of the Germany National Football team suggests, that best describes the Germany Team as well. Germany is one of the most powerful and successful football teams in the world. It has won the three World Cups (1954, 1974, and 1990) and three European Championships (1972, 1980, and 1996). Besides these major Achievements, Germany National Football Team has placed Germany in runner up position for many times. Germany is placed in 2nd position of FIFA World Football Ranking. Germany plays in UEFA Europe Confederation Cup and the current Head Coach of Germany is Joachlim Low, who is known for his attacking strategy and style. Philipp Lahm is the captain of the team.

Known as National Mannschaft (National Team), DFB-Elf (DFB Eleven), DFB-Auswahi(DFB selection) or Nationalelf (National eleven) in the homeland whereas DIA Mannschaft(The Team) or Die Adler (The Eagles) in international arena, Germany is one of the most expected candidates of the World Cup 2014 grabber. The History of Germany Football tells the tale of their success and achievements. Germany Started playing in World Cup since 1934.