How Much Jeremy Wade Earns From His Television Career? Is He A Wealthy Man?

Animal Planet's popular show River Monsters has over 1 million viewers regularly since its premiere in 2009. The major reason for the success of the show is Biologist Jeremy Wade who has been the part of the show since its start. The latest episode of the show aired on 28 May 2017.

How much has the television personality who traveled various part of the world's remote river earned from his career? What is his net worth? Let's find out here.

How Much Is Net Worth Of Television Personality Jeremy Wade? His Source Of Income Details

Jeremy Wade's estimated net worth is $2 million according to Celebrity Net Worth. The 62-year-old River Monsters star earned huge part of his net worth from his television career and some part of it from sales of his books.

Wade who started fishing since the age of seven or eight earned prominence with the success of the show, River Monsters. The show is one of the most-watched and successful shows in the history of both Animal Planet and Discovery Channel. The show last aired on 28 May 2017. 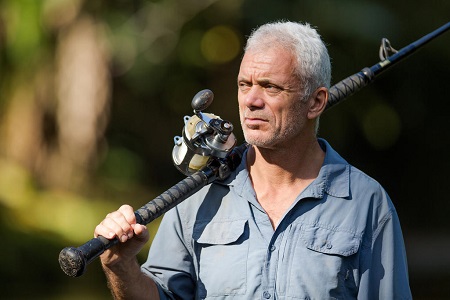 CAPTION: Jeremy Wade has an estimated net worth of $2 million SOURCE: Animal Planet

Reportedly, the first season of the show delivered an average of over 1 million viewers regularly and the final episode of the season accumulated over 1.47 million viewers. IMDb has rated the show 8.2. In 2002, he hosted Jungle Hooks.

As an actor, he appeared in the 2014 science fiction horror film, Blood Lake: Attack of the Killer Lampreys.

Also Read: Learn what does Jeremy Wade Do Besides His Work In Television

Previously, he used to work as a biology teacher at the University of Kent and his salary was around $31,920. Besides, he had several other jobs such as motorcycle dispatch rider, news reporter, a tour guide, Portuguese-English translator and as a writer for magazines including Sunday Telegraph, The Field, BBC Wildlife magazine, etc.

Wade, who was raised in world’s remote river banks of the Suffolk Stour, living quite an adventurous life. He spent more than 36 years traveling in different remote rivers of the world to track large and little-known and fearsome freshwater fishes.

His journey first began from India. In 1982, he traveled mountain rivers of India after getting inspired by reading an article about fishing for mahseer. Since then Wade explored many remote rivers like Zaire, Mekong, Congo, Amazon in search of most mysterious fishes.

Besides, the television host loves scuba diving in a cold and low-visibility water around the U.K. coast during his free time. Freediving and rock climbing are the other activities he usually does apart from fishing.