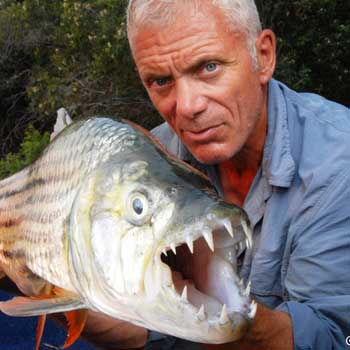 Jeremy Wade is a famous TV presenter, biologist, and extreme angler. He is a writer with a special interest in rivers and freshwater fish.

He is also a traveler who has been traveling the world's remote rivers for the last 35 years. Wade, however, is best recognized as a presenter on Discovery's most viewed TV series, River Monsters.

After the show's cancellation, as of 2021, he is the host of the  TV series, Mysteries of the Deep.

Jeremy Wade was born on March 23, 1956, in Ipswich, Suffolk, England. He is British by nationality belongs to the Caucasian ethnicity. Wade grew up in southeast England, on the banks of the Suffolk Stour.

Wade attended Dean Close School. He graduated from Bristol University with a degree in zoology. He has a post-graduate teaching certificate in biological science from the University of Kent.

The television personality has also worked as a secondary school biology teacher while at Kent. He can speak several languages besides his mother tongue English. He is fluent in Portuguese as well and can also speak French and Spanish.

The traveler began fishing at an early age. As a child, he used to fish along the river banks of Suffolk’s River Stour. The hobby later turned into a pa s sion. When he grew up, he began to travel the world searching for the different distinct species of rivers available in the different parts of the world.

He made his first trip to India’s mountain river in the year 1982 in search of fish species.

In 1992, Wade wrote a book Somewhere Down The Crazy River along with the writer Paul Boote which is considered to be a cla s sic of angling literature. He has also penned for the BBC Wildlife magazine, The Times, Sunday, Guardian, and The Field magazines.

Wade filmed a five-part series Jungle Hooks in the Amazon in 2002 for Discovery Europe and in 2005, he filmed Jungle Hoods India.

Wade has visited different places and mostly he has made a number of trips in the Congo and Amazon rainforest as it is a tropical rainforest rich in several types of natural biodiversities. With the help of local fishermen, he has been able to find many of the fish species.

In the year 2014, Wade made his acting debut appearing in the movie Blood Lake: Attack of the Killer Lampreys in the role of Lamprey expert. Before, this, he had covered the Lampreys in the River Monsters episode of Vampires of the Deep. The movie has made the episode as its reference where Jeremy has allowed himself to be bitten by the Lampreys to test their abilities.

Wade has published two books titled Somewhere down the Crazy River in the year 1994 with Boote P and River Monsters: True Stories of the Ones that Didn’t Get Away in 2011.

Wade gained international fame, following his appearance in Animal Planet's River Monsters. The show was mainly a wildlife doc u mentary. It was one of the most viewed and successful shows on the channel. However, it was canceled after the ninth season in 2017. In a press release, the television host Wade stated:

“Some shows can run forever, but our subject matter is finite. 10 years ago, I had a list in my head, which seemed impossibly ambitious at the time, but everything has now been ticked off—and then some. I have seen things beyond my wildest dreams, and sharing those moments with our loyal Animal Planet audiences has made them doubly special.”

As of 2021, began a new TV series, Mysteries of the Deep which focuses on underwater mysteries ranging from the loch ness monster to the Bermuda triangle.

Talking about his personal life, the information regarding his marriage or wife or children is still under review. He has not disclosed any information about his love affair with having a girlfriend in the past.

However, his personal website www.jeremywade.co.uk suggests he is still unmarried. Perhaps, he does not want the public to know about his personal life and family matters keeping them in a low profile.

Wade is fond of traveling and fishing. He has spent several years fishing in Brazil due to which he has been fluent in Portuguese. Besides having the experience of traveling, he was also detained as a suspected spy, suffered from Malaria, was threatened at the gunpoint, and survived a plane crash. The awful experiences so far in the life of a person. However, this also proves, he is a brave one.

Salary And Net worth

Wade is a daring personality. He has earned a great amount of salary from his work. His current net worth is $2 million. He is paid well for his appearances in River Monsters and Mysteries of the Deep.

According to some reliable online tabloids, Wade's exact annual salary is not revealed yet, however, as he is the presenter of the widely successful television programs, he undoubtedly earns the salary in thousands of dollars each year.