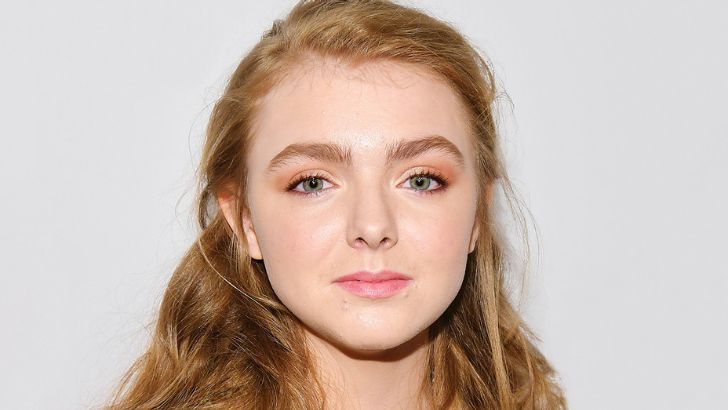 Elsie Fisher, an American teen actress turned professional in 2009 & grabbed a TV stint with a guest role in Medium (2009). The Golden Globe Award nominee got her career breakthrough as Kayla Day in the 2018 coming-of-age comedy-drama film Eighth Grade; it received an 8.84/10 average rating by Rotten Tomatoes.

Already with 27 acting credits in 2020 including TV series & movies, Fisher is also an acclaimed voice-over actress, in fact, at the age of 7, she voiced  Agnes in Despicable Me (2010) and then in its 2nd installment Despicable Me 2 (2013).

Elsie Fisher was born on April 3, 2003, in Riverside, California, the USA, to Christopher Fisher, while detail on her mother is yet to be out. She holds an American nationality & is of mixed ethnicity; is half Scandinavian and has German, English, Swiss, Scottish as well as distant Irish & Welsh ancestry.

Elsie began acting at the age of 5, notably in commercials of Hershey's & has already appeared in 16 national commercials. In 2009, then-6 years old, Fisher made her TV debut in an episode of Medium, & shortly after, was cast for a voice-over of Agnes in Despicable Me (2010). She would voice Agnes again in the franchise's 2nd installment Despicable Me 2 (2013) before Nev Scharrel replaced her.

Elsie got her biggest career break from the 2018 film Eighth Grade, where she portrayed the main cast Kayla Day, an eighth-grader who socially-struggles & wrestles with her own insecurities. The movie starring Josh Hamilton, Emily Robinson, Jake Ryan, and Fred Hechinger, made $14.3 million in the box-office over the budget of $2 million.

The film won her numerous accolades including the Critics' Choice Movie Award and Gotham Independent Film Award along with a nomination for Golden Globe Award for Best Actress- Motion Picture Comedy or Musical. Reportedly in a total of 17 awards in 23 categories, the California born-actress won 10 of them.

What Is Elsie Fisher Currently Doing?

After the most-recent acting credit as Parker Needler (voice) in The Addams Family (2019), Elsie, as per IMDB, is currently working on her upcoming projects: Shoot the Rooster (post-production) and The Shaggs (pre-production). The latter film is a biopic of the Wiggin sisters, the co-founders of all-female rock band The Shaggs.

Moreover, she is set to appear in the upcoming but "untitled" 9th installment of The Texas Chainsaw Massacre franchise. The film will star Jacob Latimore, Moe Dunford, and Olwen Fouéré.

Relationship Status- Is She Dating Any Boyfriend?

As of 2020, Fisher is not dating anyone & no reports of her boyfriend or past affairs ever came up. Indeed, the teen actress is majorly focusing on her career rather than relationship extension. An avid user of Instagram & Twitter, Elise has over 97.1K followers & 47.9K followers respectively, where she usually posts about her projects & travels.

According to online sources, Elsie has a net worth of $500,000 in October 2020. Allegedly, she earned tens of thousand dollars through on-screen appearances & commercials. After the critical acclaim through the 2018 film Eighth Grade, her estimated annual salary is in the 6-digit figure.