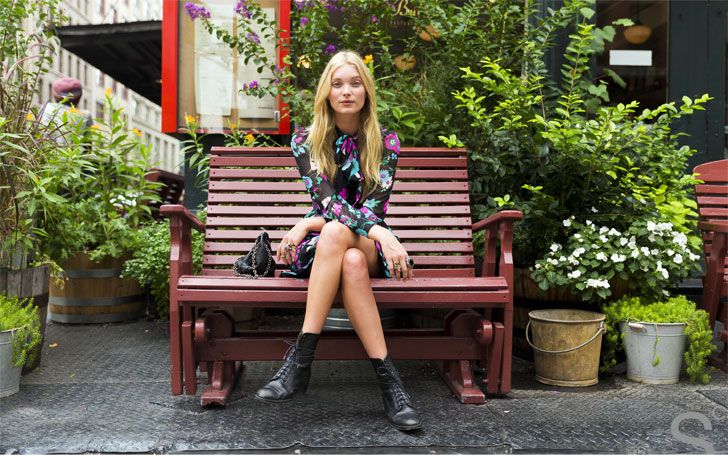 Elsa Hosk achieved most model's biggest dream in 2011 when she joined Victoria's Secret. Hosk who is always in the news for her stunning appearances got promoted to Victoria's Secret Angel in 2015. The model is in news lately, not for her fashion shows, but again due to her looks.

The super model apparently went braless at the Hamptons Bash.

Victoria's Secret Angel Elsa Hosk flashed off her stunning figure as she appeared braless in a fitting sexy golden dress at the FIJI Water at Hamptons bash. The super model looked stunning as she showed off her ample cleavage and perky assets.

Twenty-eight years old Hosk left her vertiginous heels and instead chose black lace-up sandals. Her makeup was on point as well.

Who is Elsa Hosk Dating Currently?Who is her Boyfriend?

Elsa Hosk is in a relationship with Tom Daly, the co-founder of eye-wear brand District Vision. The Swedish beauty started dating her businessman beau since 2015. The pair frequently makes public appearances.

The lovebirds appeared locking their l in New York. recently. Despite their busy schedules, the couple managed to spend a romantic date together. Elsa Hosk frequently shares her boyfriend's pictures on Instagram. Take a look at this one!

Prior to dating the Businessman, the blonde beauty, Elsa Hosk, dated Andreas Kleerup, that was in 2008.  Kleerup is a Swedish record producer and a drummer. He was also a member of the Swedish group, The Meat Boys in 2012. They broke up in 2012 after dating for about 4 years. Elsa Hosk was romantically linked to actor Chord Overstreet in June 2012. The rumor of their dating sparked as the model and the actor were spotted together at a Subway Series kickoff event.