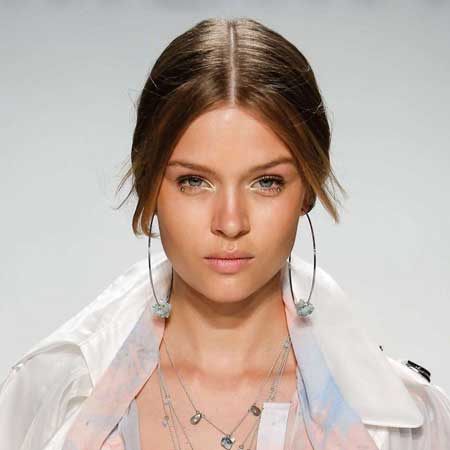 Josephine Skriver is a Danish fashion model, well recognized for her appearance as a Victoria's Secret Angel, also in various fashion shows.

Josephine Skriver was born on 14 April 1993, in Copenhagen, Denmark. To her mother, an IT analyst and her father who is a marine biologist. She both parents is gay, as Josephine and her brother Oliver were conceived through IVF.

When she was at her age of fifteen, Skriver was found and approached about her modeling potential during her trip to New York with the football team.

Later, she was signed by Unique Models, an international modeling agency located in Copenhagen. She was serially approached by other agencies from other countries too. However, she decided to wait until she completes her school.

Josephine is Caucasian in ethnicity and holds Danish nationality.

Shriver's career began right after she completed her school, as she made her debut season Fall/Winter 2011, while she opened for Alberta Ferretti and closed for Prada.

The same season, she also rolled into many other prominent designers including, rag and bone, Calvin Klein, Dolce & Gabbana, Gucci, Yves Saint Laurent, Givenchy, Alexander McQueen, and Christian Dior.
Since then, Skriver has made her appearance in over 300 fashion shows like Oscar de la Renta, Chanel.

The 23-year-old Danish professional model is currently in a relationship. She is having an affair with her long-time boyfriend, Alexander DeLeon.

She has been in dating with an American songwriter, singer, and lead vocalist of The Cab,  Alexander since Dec 2013. But the couple has not married yet.

Besides her love affairs, Skriver has spoken numerous time about LGBT rights and freely discussed her upbringing with her parents being a member of LGBT community.

In 2015, Skriver was made a celebrity ambassador for the family Equality Council. Also, its Outspoken Generation Program focused on raising awareness about LGBTQ families, as she was very much inspired by her parents.

Skriver has said her ultimate goal is that yer story will "not be that interesting soon because that would mean that society has come to accept LGBT parents to be just as traditional and normal as any other way of having a family."

Josephine Skriver being a Victoria's Secret Angel, she has also appeared in several magazines some of them including Elle,  Marie Clarie, Vanity Fair, Harper's Bazaar and Vouge.

She earns an enormous amount of money from her modeling career, endorsements which add up to her current net worth that is estimated to be $ 12 million.