American actor Eli Brown is one of the rising faces in the entertainment world. He has been incredible with his acting credits in TV series like Pretty Little Liars: The Perfectionists, Spinning Out, as well as films, including The F**k-It List, Run Hide Fight, and Wrath of Man. As of now, the actor appears in The CW series Gossip Girl.

How Old Is Eli Brown?

Eli Brown is currently 21 years old. He was born Elijah Brown on August 13, 1999, in Eugene, Oregon, the United States, to his mother, Katie Brown. He also has a brother.

On February 9, 2021, he posted a throwback with his mother on his official Instagram. 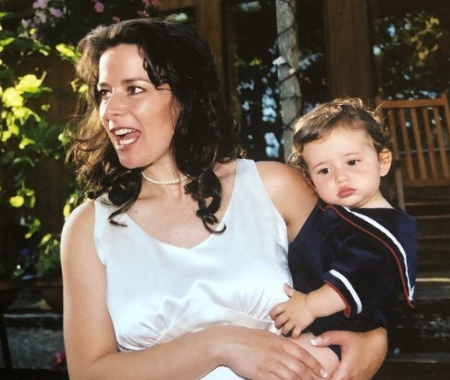 He is American by nationality and possesses white ethnic background. He stands at the height of 5 feet 7 inches ( 1.70 meters) and weighs around 56 kg or 123 lbs.

The Gossip Girl actor is believed to holds an estimated net worth of $500 thousand as of May 2021. He gathered all of his sources of income through his career in acting.

He has worked in TV series like Pretty Little Liars: The Perfectionists, Spinning Out, as well as films, including The F**k-It List, Run Hide Fight, and Wrath of Man.

Additionally, the actor adds $361.5 to $602.5 per sponsored post from his Instagram @elibrown.jpeg, which currently has 119 thousand followers.

Eli Brown started his acting career in the short film Cupid's Paradise in 2018. A year later, he made a breakthrough for his role as Dylan Walker in the television series Pretty Little Liars: The Perfectionists in 2019.

Here is one of his interviews of the following TV series;

He was cast as Tristan Voy in the feature film Run Hide Right and Brett Blackmore in The F**k-It List in 2020. The same year, he appeared as Dave in the TV series Spinning Out.

In 2021, he acted as Dougie in the action-thriller film Wrath of Man. The actor currently appears in The CW series Gossip Girl alongside Kristen Bell, Elizabeth Lail, Thomas Doherty, and Emily Alyn Lind.

Besides acting, the 21 years old actor is also a singer-songwriter who has released a number of songs on YouTube. He considers late legendary musicians Jim Morrison and Jeff Buckley as his musical inspiration.

Who Is Eli Brown Dating?

Run Hide Fight actor was previously in a relationship with his girlfriend Talia Wirkkula-Hibdon. She is a model by profession. They began their relationship back in 2015.

As per some resources, the couple is no longer together. While the sources have also claimed, Eli is currently dating a girl named Lauren Choulos however., the actor has not confirmed his relationship status.

The Gossip Girl star is also active on Instagram under the handle @@elibrown.jpeg, which currently has racked up over 119 thousand followers.