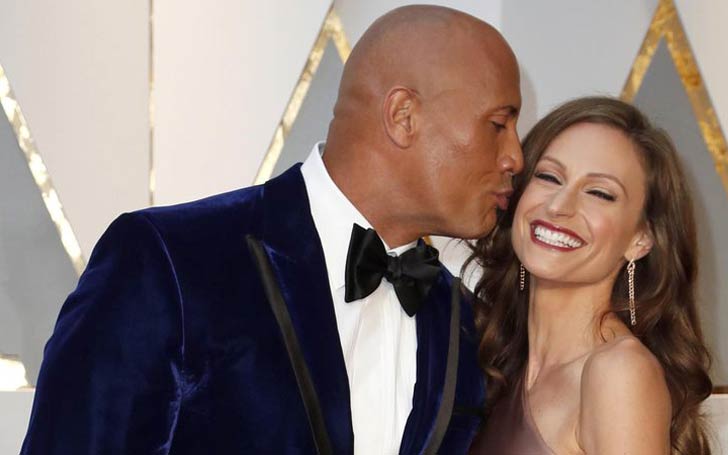 Congratulations are in order for WWE Superstars and actor Dwayne ''The Rock'' Johnson and his girlfriend, Lauren Hashian. The duo has welcomed their second child, a baby girl together.

The 45-year-old pro wrestler took to his Instagram on Monday, 23rd April announcing the birth of his daughter, Tiana Gia Johnson. Johnson shared a sweet snap holding his daughter close to his chest.

Skin to skin. Our mana. Blessed and proud to bring another strong girl into this world. Tiana Gia Johnson came into this world like a force of nature and Mama @laurenhashianofficial labored and delivered like a true rockstar. I was raised and surrounded by strong, loving women all my life, but after participating in baby Tia’s delivery, it’s hard to express the new level of love, respect and admiration I have for @laurenhashianofficial and all mamas and women out there. Word to the wise gentlemen, it’s critical to be by your lady’s head when she’s delivering, being as supportive as you can.. holding hands, holding legs, whatever you can do. But, if you really want to understand the single most powerful and primal moment life will ever offer - watch your child being born. Its a life changer and the respect and admiration you have for a woman, will forever be boundless. And to my third and youngest daughter, Tiana Gia - like I did when your two older sisters Simone Alexandra and Jasmine Lia were born, you have my word, I’ll love, protect, guide and make ya laugh for the rest of my life. Your crazy dad has many responsibilities and wears many hats in this big ol’ world, but being your dad will always be the one I’m most proud to wear. Oh and one more thing.. you’re gonna love rollin’ in daddy’s pick up truck. #TianaGiaJohnson #3rdDaughter #BlessesAndGratefulMan #ImInTROUBLE

It is the second child and second daughter of Johnson with his girlfriend Hashian. The duo is already parents to their 2 and a half-year-old daughter Jasmine Lia. Johnson is also a father to 16-year-old daughter Simone Alexandra with his former wife, Dany Garcia.

Our Jasmine Lia would like to make a big announcement - IT’S A GIRL!  @laurenhashianofficial and I are boundlessly grateful for this blessing as this spring we’ll welcome our second baby. Plus, Jazzy is excited to boss around and protect her lil’ sis. And once again, big daddy is completely surrounded by beautiful estrogen and loving, powerful female mana. All girls. One dude. And a boy dog. I wouldn’t have it any other way. #ItsAGirl #GratefulMan #TequilaTime

Johnson expressed his excitement for expanding his brood earlier this month while talking to Ellen DeGeneres on her talk show. There he said,

I can't make boys-not that I want to. Girl power.

Out of the blue, about a week and a half ago, we were eating breakfast … and I mean, out of the blue, we have her cartoons on, she’s eating, she looks up and she goes, ‘I don’t want a baby sister.’ Firm, direct eye contact and that was it.

Johnson and his girlfriend Lauren Hashian have been together since 2007. They began dating shortly after Johnson's divorce from his ex-wife Dany Garcia in 2006.