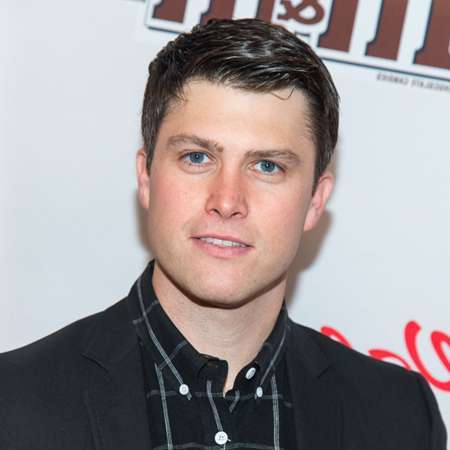 Colin Kelly Jost, an American actor, comedian, and screenwriter is known for his work on Saturday Night Live (SNL). He there has served as a writer since 2005 and "Weekend Update" co-hosts since 2014 alongside Leslie Jones, Pete Davidson, and Michael Che. He also served as one of the show's co-head writers from 2012 to 2015, and it was announced that he would come back as one of the show’s heads writers in December 2017.

It was confirmed in December 2017 that Jost had begun a relationship with actress Scarlett Johansson.

Colin Kelly Jost was born and raised on Staten Island in New York. He was born on June 29, 1982. His father, Daniel A. Jost is a former teacher at Staten Island Technical High School. His mother, Kerry J. Kelly, is the chief medical officer for the New York City Fire Department and a physician on Staten Island.

He also has a brother, Casey Jost, who is also a writer and producer of TV shows such as Late Night with Jimmy Fallon, Some guys are bigger than others, and Impractical Jokers. He was raised in a roman catholic community.

#puberme and my bro @caseyjost. I was voted Best Smile and Worst Jehovah's Witness. Thanks to @nickkroll and @stephenathome for doing this to raise money for PR #RinconPride

He studied “the History and Literature of Russia and Britain” at Harvard. He was also the president of the Harvard Lampoon, the university’s humor publication. This is where he honed comedic writing chops.

Jost started his career in comedy in 2005. Shortly after graduating from Harvard, Jost was hired as a writer for Saturday Night Live. He was 22 years old at the time.

He later became the writing supervisor for the show from 2009-2012. He is known for often collaborating with Rob Klein, a fellow SNL co-head.

At the request of producer Lorne Michaels, he replaced Meyers in Late Night with Seth Meyers on March 1, 2014, after Seth Meyers left. During that time, he did the “Weekend Update” feature. He takes Norm McDonald and Tina Fey as his influences for his “Update” anchor work.

He has appeared as a stand-up comedian on Late Night with Jimmy Fallon as well as on TBS and HBO networks. He has also appeared several times at Chicago Just for Laughs festival and Montreal Festival.

He has written and published three “Shouts and Murmurs” pieces in The New Yorker Magazine. In addition to this, he has also written for The New York Times Magazine, The Huffington Post, the Staten Island Advance, and Radar.

Jost has received a Peabody Award and three Writers Guild Awards for his work on Saturday Night Life. He was named a Breakout Artist by Carolines on Broadway in 2011. He has also been nominated for five Emmy Awards. More info about him can be found in his bio and wiki.

He not only writes for Saturday Night Live but has also done stand-up on Late Night, TBS, and HBO as well as various comedy festivals. He is also well known for his works on Staten Island Summer and Paul Rudd Pitches Harvey Weinstein.

The SNL star, Colin Jost's net worth is around to be $1.5 million at present. Being the host of SNL, his annual income is increasing now. He receives annually over $1 million from the SNL  as his salary is $25,000 per episode.

Colin Jost is currently unmarried. He is allegedly dating beautiful actress Scarlett Johanson since July 2017. Johnson was previously married Roman Dauriac from 2014-2017. Recently, Jost was seen together with her in London. However, the couple has not revealed their relationship publicly.

He previously was in a relationship with Rashida Jones, the star of the famous American sitcom “Parks and Recreation”. He also tours around to different cities and performs standup comedy wherever he goes.