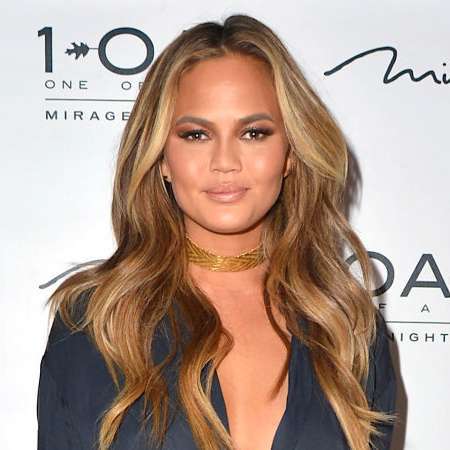 American famous model, Chrissy Teigen is known for her appearance in the Sports Illustrated Swimsuit Issue in 2010. She modeled for several brands magazines and designers. Moreover, she is also a cook and writer. From her multiple careers, she has accumulated impressive net worth.

Regarding her personal life, she is married to a famous singer, John Legend with whom she shares a son and a daughter.

Chrissy Teigen was born Christine Diane Teigan on November 30, 1985, in Delta, Utah, the United States under the birth sign Sagittarius. She is American by nationality and belongs to Mixed ethnicity (Norwegian descent and Thai).

Regarding her academics, she attended Huntington Beach High School and Snohomish High School.

Teigen was born as the daughter of mother Vilailuck Teigen and father Ron Teigen Sr. Her mother was a homemaker and her father worked as an electrician.

Her family lived in Hawaii, Idaho, and Washington and eventually settled in Huntington Beach, California when she was a teenager. She has a sister named Tina Teigen. Her mother, Vilailuck, is from Thailand, while her father, Ron, is an American of Norwegian descent.

Chrissy Teigen initially, worked in a surf shop where she was discovered by a photographer. IMG Models represented her worldwide. In a short period of time, she gained huge popularity.

In 2004 Teigan became an IGN Babe and later she appeared as a substitute model on Deal or No Deal. She was featured on the cover of Maxim's calendar. Moreover, she has also been part of several advertising campaigns including in Venus, Olay, Nike, Gap Factory, UGG Australia, Rock and Republic, and Billabong.

Later, Teigan appeared as a guest host and contributor on MTV, and TMZ, she also appeared on Watch What Happens Life and on America's Next Top Model. Chrissy in 2013, was part of the reality competition show, Model Employee on VH1.

Besides, she is a cook and a writer. Chrissy has presented herself as a writer of a blog, and sodelushious.com. In February 2013, she was featured on an additional Cooking Channel special. She has also been a part of filmed a Cooking Channel special titled Cookies and Cocktails. Teigan has also appeared in the music video for her husband on the song All Of Mine.

Teigan published a cookbook, Carvings: Recipes for All the Food You Want to Eat in 2016 which became the New York Times bestseller and the second-best-selling cookbook of the year as per Publishers Weekly. As of 2018, she released her second book, Cravings: HUnsry for More.

According to Celebrity Net Worth, Chrissy Teigen has an estimated net worth of $75 million whereas her net worth is estimated to be $10 million as per The Richest. As per some sources, a professional model earns an average salary that ranges from $652k to $842k.

Teigan also earns from her popular book, Recipes for All the Food You Want to Eat worth $1537.14 in Hardcover whereas her second book, Cravings: Hungry for More costs  $11.45 in Kindle Edition and $13.63 in Hardcover. Furthermore, she also makes money from her collaboration with Becca cosmetics.

Teigan owns a $14.1 million Beverly Hills Mansion which was previously owned by the famous singer, Rihanna. She also has a Lincoln car ($35,605 to $50k). Besides, she is also involved in charity and donations. In 2018, she along with her family donated $288k to charity.

Chrissy Teigen, the gorgeous model is married to superstar singer and musician John Legend. The pair met for the first time on the sets of Legend's music video for Stereo. Soon after they met, the couple started their affair.

Teigen and Legend started dating in 2007, later four years of an affair they engaged in December 2011 after her husband proposed to her. And after two years of engagement, they married in September 2013 and their wedding took place in Como, Italy in a private ceremony attended by families and friends. At the wedding, the model wore three Vera Wnag dresses.

The pair welcomes their first child, Luna Simone Stephens who was born on 14th April  2016. In 2017, she was rumored to be pregnant with Legend's second child. Later, they confirmed the news and accepted the rumor.

In April 2018, Teigan had a baby shower which was attended by several famous celebrities like Kim Kardashian, Kris Jenner, and Kanye West.

On 17th April 2018, they welcome their second child, Miles Theodore Stephens. They confirmed it via Twitter.

Chrissy currently lives in their mansion along with her husband and children.

Check out the five facts about Chrissy Teigen: