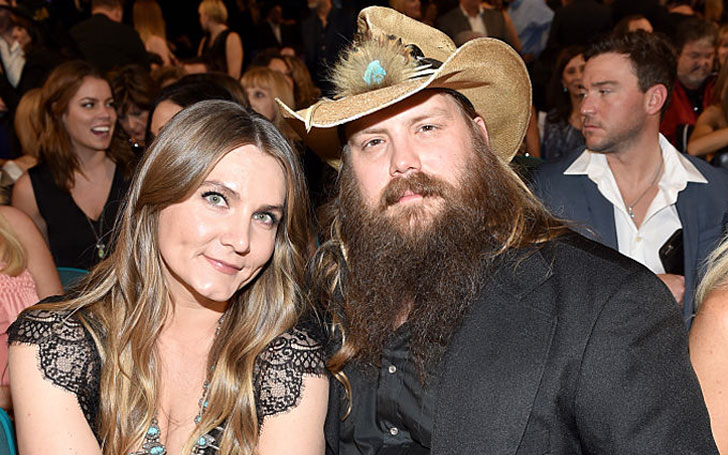 The country singer Chris Stapleton and Morgane Stapleton got married in the year 2007. They met three years before the marriage, and their love story will melt hearts!

In the midst of the divorce jungle that Hollywood is, this relationship stands out and shines bright!

A love-story better than the movies...

The singer-songwriter Chris Stapleton and writer Morgan Stapleton met each other at a Nashville publishing house 13 years back, in 2004.

Together they have become one of the most inspiring love Hollywood couples now.

Morgan had a friend who worked alongside Chris, so Morgan hung out at the office hoping for a chance to listen to his songs.

"We'd hear the jingle of his keys as he walked down the hall, and we knew he was coming to play us whatever new song he had written,"- said Morgan.

Things were going routinely until one day Chris asked Morgan to work on a song. It was Friday and already 6 pm. (First date)

"We didn't get much writing done that night"-added Morgan.

The couple went on to date for three years before getting married in  2007.

The fairy tale wedding and the happily ever after

Chris Stapleton married Morgan in 2007. They are one of the happiest couples in Hollywood right now, but it was not always a happy life for the couple.

As the saying goes with every sunset, there is a new beginning. The couple went through the same.

Stapleton was the frontman of the bluegrass band The SteelDrivers until 2010, but he decided to go solo, mostly to stay close to his family.

Chris Stapleton and his wife Morgane Stapleton with kids

Also Read: How happy is singer Chris Stapleton with his wife Morgane? Know more about the musical couple

In 2013 Chris released his first single "What Are You Listening To" which made it to the Top 50 but during the time his father passed away, and his song dropped down from the chart as well.

Chris's wife Morgan realized the sadness Chirs was going through and planned a road trip from Phoenix to their home Nashville, she bought a 1979 Jeep Cherokee online for the journey.

They could tell that the jeep would break down somewhere on the highway, but they took off nonetheless.

"We looked at each other like, 'Yeah, we're finally doing this,' and then gas started spewing everywhere,"

Apparently, they had to call the owner who suggested not to fill the tank all the way.

The road trip ended up being a success as it inspired Stapleton's first solo album Traveler, the album was a huge success. Morgane handpicked all the songs in the album.

Talk about being the muse! Morgane's patience and choice and Stapleton's creativity seem like a right match!

love love love thanks for the  @andybarron

Now the couple is writing and performing together. Recently Chris and Morgane invited Miranda Lambert and her boyfriend to share the stage at their Los Angeles concert.

Now, that's a concert I'd like to go to!