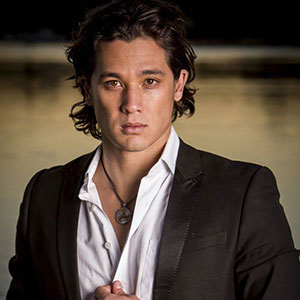 Chai Hansen is an Australian-Thai actor who gained fame for his roles in series such as "Mako: Island of Secrets" and "The 100." Hansen has been considered one of the top talents in show business. He has also acted on the big screen and has gathered a lot of fame. Besides, he is also a former track and field athlete who has set several records.

Chai Hansen was born Chai Romuren on February 8, 1989, in the beach city of Ko Samui, Thailand. He was born to mother Sandra Hansen and father Superut Romuren. At the tender age of seven, he moved to the South East of Queensland, Australia with his mother. He is of mixed Thai and Australian Heritage, but we do not know much about his father.

Happy International Womens day to all the beautiful women out there Look how cute Mum & Sis are. Ahhhhh #squealsofjoy #loveofmylife @sarahromruen @samsachai

He has a sister named Sarah Hansen who also moved to Australia with their mother. Chai Hansen completed his high school education in 2007 and pursued higher education in the field of performing arts. He won a scholarship there and graduated with a degree in 2011.

Chai Hansen began his career in acting by performing arts in his college years where he was trained in stage and screen acting. He was an athlete before he put his step in acting and competed in many track and field athlete competitions where he also set records in Australia and Canada for the Triple Jump Event.

In addition, he was also interested in dancing in his college days and started dance training in 2007. Later on, he began working in small roles in some television series. He has played some notable roles such as Zac in Mako: the Island of Secrets, and llian in The 100. He worked alongside Katherine Mcnamara in the Netflix series Shadowhunters as Jordan Kyle in 2016.

You Would Like To Know: Shadowhunters' Katherine McNamara's Journey So Far

Chai Hansen has many T.V shows and films credit to his name. Some of his previous series and movies have been high-rated and were greatly loved by the viewers. He might have earned a decent sum of money from his acting career, however, Chai Hansen's net worth is still under review.

According to some net worth and salary sites, an average actor in the Australian film industry earns around AU$29,926 - AU$103,065 annually. As of 2018, Chai Hansen's net worth is estimated to be around $50 thousand.

As of 2018, Chai Hansen is unmarried and not dating any girlfriend. In 2016, he was rumored to be in a relationship with his co-star Ivy Latimer.

People started speculating them as a couple after they started posting their pictures on their social media. Many of their fans commented on their posts saying the couple looked gorgeous together. Some of their fans also asked if they were dating indeed in the comments, but later Hansen denied the rumors.