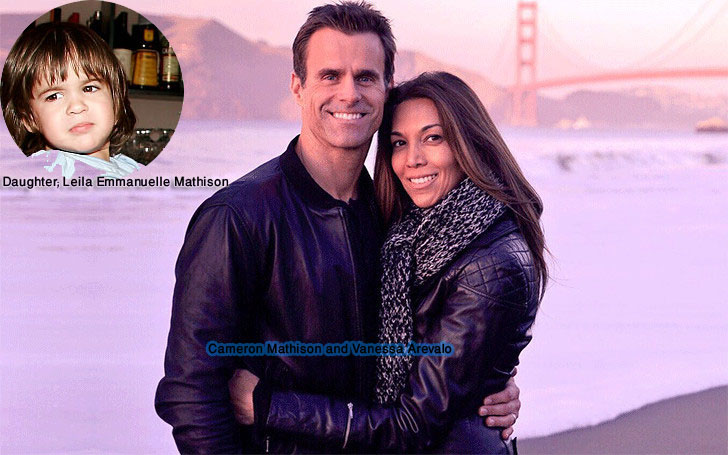 The All My Children actor Cameron Mathison is living a happy married life with his wife Vanessa Arevalo since 2002. The 50-year-old Canadian actor and Arevalo also share two children in the 17-year long married relationship.

Mathison and Arevalo's marriage is sort of an exception in Hollywood. So, why not take some time to appreciate this beautiful couple and their exemplary marriage? Here's everything you need to know:

One major thing needed to keep your married life healthy is love, and we can see lots of love and passion between Cameron and Vanessa Mathison.

The couple began dating shortly after getting together in 2002 and married the same year. Often marriages that don't have a long dating history to back-up don't last long. But Cameron and Vanessa aren't your regular couple. Even though they married the same year Mathison and Arevalo are still happy in their marriage, even 15 years later. Cameron Mathison and Vanessa Mathison exchanged their vows on 27th July 2002 among the relatives and family members attending the marriage ceremony. Vanessa is a  public figure and a model before being Cameron Mathison's wife.

There might have risen lots of casual misunderstandings between the couple, the good news is they’re still together in a strong bond of marriage. There hasn’t appeared any bitter news of their feud or divorce yet as well.

Cameron and Vanessa have two children together, perfect toppings to a perfect family. Their first child, a son named Lucas Mathison was born only after nine months of their marriage, on 20th April 2003.

The couple didn't rush for a second baby. They had their second baby three years after, on 7th July 2006. Mathison and Arevalo's second child is a daughter Leila Mathison.

Cameron and Vanessa both seem quite happy with their family. They always enjoy having a good time together and they also go out with their two kids as much as they can. We can also see them updating their socials with their family photos and sometimes with only theirs.

The places were mind blowing, the experience unforgettable, but the time together as a family is what I’ll remember most Here are 10 more photos of the hundreds of beautiful shots my wife took. Thank you @vanessa.mathison for planning this trip of a lifetime, and for documenting it so beautifully with these photos#tripofalifetime #familylove #familytravel #southeastasia #bagan #chiangmai #bangkok #wanderlust

Like other famous celebrities, actor Cameron Mathison’s dating history doesn’t make a long list. The only girl Cameron Mathison has been publicly known to date apart from his current wife is Jennifer Esposito.

He enjoyed his romantic dates with the American actress Esposito for over a year starting from 1999 to 2000.

Along With His Successful Personal Life, Cameron Also Maintains An Impressive Net Worth

Cameron Mathison is an actor and TV host. According to celebrity net worth, Mathison owns a net worth of $2 million as of 2020. In 1998, the actor was cast in a movie 54 along with Salma Hayek, Neve Campbell, Mike Myers, and Sela Ward. It grossed over $16 million.

Since 2018, Mathison is working as a co-host in Home and Family alongside Debbie Matenopoulos.