"Strength and growth come only through continuous effort and struggle" and the life of Steven Jay Williams is the perfect example to support the statement. He is better known by his online pseudonym, Boogie2988, and is one of the successful YouTubers today, best known for his video rants about video games and nerd culture as a character named Francis. As of 2022, he has become one of the most successful internet personalities with more than a million subscribers on his Youtube channel. Willaims is the man behind the popular fictional character Francis and through that character, he parodies trending video game news. Similarly, his videos are also related to domestic abuse, fat-shaming, nerd culture, pop news, and many more.

Boogie2988 was born Steven Jason Williams on 24 July 1974, in Virginia to Wanda Williams and Carl Williams as one of their three children. His mother was a teacher whereas, his father was a coal miner.  He has an older brother named Bryan and an older sister named Karla.

Regarding his education, he went to a pre-collegiate program called Upward Bound. He then went to the University of Virginia but left after breaking up with his then-girlfriend. The Youtuber was raised in a highly dysfunctional family with an alcoholic absentee father and an abusive mother.  He had a very rough childhood, lack of love and money made his early youth miserable. As a child, he went on binge eating which made him unhealthy. He was also overweight and the shame of his own body gave way to troubled adolescence.

Williams was highly depressed and even on the verge of suicide but he did not give up. His never-to-give-up attitude gave him strength and made him the successful man that he is today.

Career As A Youtuber

At an early age, Williams often suffered from depression and used to have a very low level of self-confidence. However, with the support of his elder brother, he somehow managed to become a web designer but due to his health issues and low self-esteem, he was not able to focus on his work.

Like people say, "every storm in your life is followed by a rainbow", his life also changed forever when he created his own Youtube channel Boogie2988 in April of 2006. The first video Boogie2988 posted was a simple gameplay video called Playing Dungeons and Dragons.

As he started posting more videos later, he began gaining more comments from the viewers offering words of praise and encouragement. This provided him hope and began uploading a wider variety of content related to gaming.

During his online career, Boogie2988 developed the fictional persona of Francis, a lisp-afflicted childish adult who enjoys breaking stuff. In addition, he also appeared at VidCon2014 alongside several other YouTube celebrities, including Caspar Lee.

He amassed a huge number of subscribers on the channel and gained huge popularity within a short time period. As often happens with well-known YouTubers, his fame spread beyond the video-sharing website and he was invited to post his content on Twitch.tv as well; he streamed on Twitch.tv 3-5 times a week.

On June 25, 2016, Boogie2988 was hacked and the hackers closed his channel. But later he was able to recover his channel and videos with the help of an expert. In late 2016, McJuggerNuggets and Boogie2988 created a collaboration series on McJuggerNuggets' Youtube channel which ended in December 2016 but later resurfaced in July 2017 in McJuggerNuggets' series, The Devil Inside.  as of 2019, his YouTube Channel has 4.5 million subscribers.

In addition, Boogie2988 has won in the trending gamer category of the Game Awards 2016.

Boogie2988's net worth is close to $2 million at present. He is one of the popular social media personalities who has amassed a number of followers in a short period of his career. As per the sources, he earns a salary of around $2.2K - $35.7K per month and $26.8K - $428.2K per annum from his Youtube Channel.

The social media star won the Trending Gamer award at The Game Awards 2016. His videos range from absurd rants to serious discussions on daily life, such as the ethics of paid promotion on YouTube channels. His estimated yearly earnings as of 2022 range from $40 thousand-$322 thousand. He might have enough money to live a luxurious life.

Talking about his love life, Boogie2988 is a divorcee. He married his former wife Desiree Williams in the year 2013 after dating for a few years. Though the couple seems much in love, on 19 December  2017, Boogie2988 announced that he and his wife were getting a divorce. 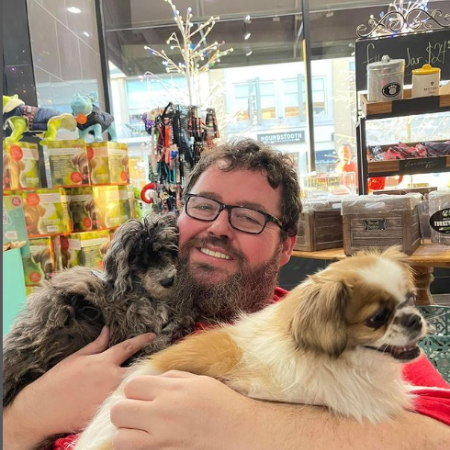 He is not dating anyone at the moment and is completely focused on his career. Further, he seems to be an animal lover. He often shares his pictures with his pets.

Why Boogie2988 Was Arrested?

The American media personality once made news headlines for his being arrested. As per the sources, Williams was having differences with his rival Youtuber, Frank Hassle. In September 2020, he warned Hassle not to disturb him and his property. Also, Willaims fired a gun in the air to warn him. The incident took place in the school area and created a big issue.

On August 1, 2017, the Youtuber got gastric bypass surgery to help with his morbid obesity. Since, the operation, he started losing weight and after following a strict diet in April 2018, he announced that he dropped from over 500 lbs to 375 lbs. The Youtuber must be appreciated for his efforts to lead a healthy life. Furthermore, he stands at a height of 5 feet 7 (1.78m) inches tall.

Like the most famous celebrities, Boogie2988 is also a victim of a death hoax that was fake. He, later posted the video on his Facebook with the title, "The Rumors of my death have been greatly exaggerated.". Have a look.

He is still alive and living a happy and healthy life.

Taking about his online presence, besides Youtube and Twitch he is also active on Twitter, Reddit, and Tumblr and as of now, he has rebooted his gaming channel boogieplays.

Check out his videos talking about Xbox One with Major Nelson.