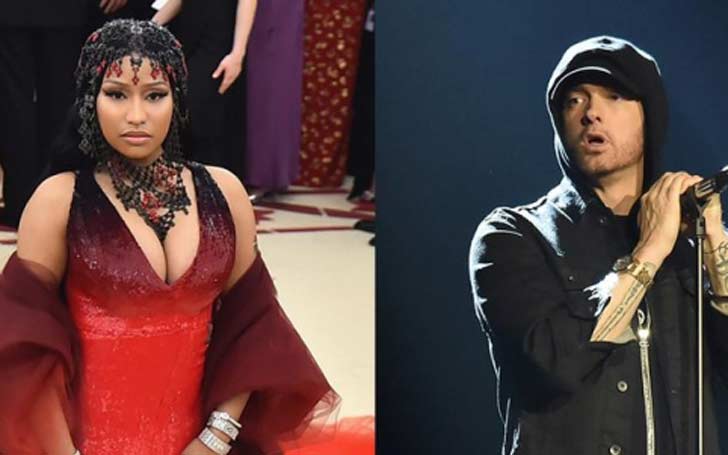 Nicki Minaj and Eminem are one of the most decorated male and female rappers of the generation. Eminem debuted in the rap game in the late 90s and since has been ruling hip-hop. While Nicki Minaj debuted in 2008 with the album Sucka Free. The pair spat rap verses together in Minaj's song Roman Revenge of her album Pink Friday.

Recent rumors claim that Nicki and Eminem are dating. It all started when Minaj responded with a fan question stating "she is dating Eminem". Is the rumor true? Are these two rap legends together for real?

New rumors suggest that Eminem and Nicki Minaj might be dating.  The news spread when Minaj in her Instagram video post wrote captioning the verse of the song Big Bank "I met slim Shady. Bagged a EM !!!"

One optimistic fan asked her whether she was dating Eminem or not. And she replied "Yes". In another song of Nicki Minaj titled Barbie Tingz, which was out in April she raps "I'm still fly. Just bagged a white guy."

It is not sure whether she might be referring to Eminem as a white guy but due to her previous Instagram post, many fans believed it could be him.

The news would not be so hot topic but Eminem himself during Concert held in Boston on May 27 gave shout out to Young Money Rapper Nicki Minaj.

He said to the crowd "How Many of you want me to date Nicki Minaj" while the crowd screamed. He then added " Well god, damn it. Me too. Nicki if you get this message, just text me later. We will talk about it".

Adding more to the fuel, Nicki also tweeted declaring her love for the rapper.

LMFAOOOOOOOOOOOOOOO. The fact that he’s silly & a goof just like me. Love him so much. Em we need you on the #Queen album. That’s where our 1st date will be; at the studio while I gaze into ur beautiful eyes as u write ur verse.https://t.co/iFYi0OlzXQ

But reports close to Minaj suggest that she was only joking in her Instagram post. It may be a tricky move to be in limelight for her and promote her new album Queen but after the Eminem's comment, it is quite sure that both stars may be involved in trolling the fans hard.

Minaj and Detroit rapper Eminem first collaborated together on a song called Roman's Revenge from her album Pink Friday.  In the song, both rapper rap about their alter egos, Roman Zolanski of Nicki Minaj and Slim Shady of Eminem.

Talking about the collaboration she states that she originally send another beat to him. But Eminem politely responded that he wants a beat that would reflect something of him. And she thought for a moment and send a beat that would quite match Eminem's angry flow. And that was how Roman's Revenge was born. 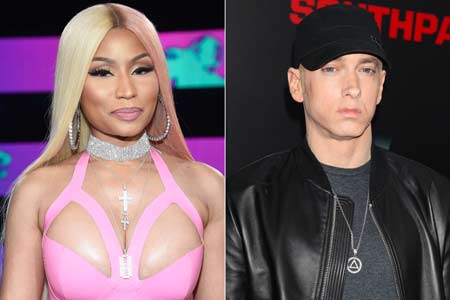 Minaj has a high respect as an artist for Eminem but who does not.  The 15 times Grammy-winning rapper is considered one of the most influential artists of the generation. He is already considered a legend in the rap game and is also the first rapper to win Oscar award for his song Lose Yourself of the movie 8-mile.  Besides this, he has also numerous other records to his name.