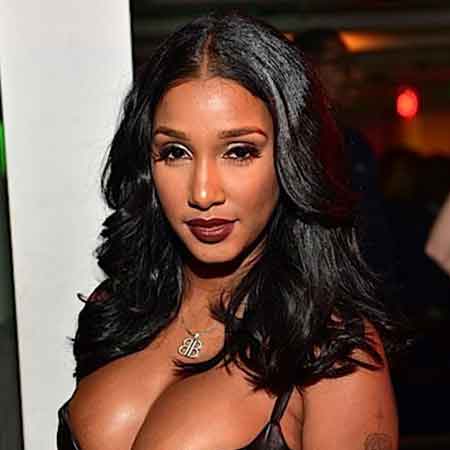 An African-American Beauty, Bernice Burgos is an Instagram model who, as of Feb 2020, has 5.7m Instagram followers. Known for her attractive look and curvaceous body, Burgos also featured in a number of popular music videos like Diced Pineapples, Work Out, and Ain’t Leaving Without You. Besides, she worked for several reputed magazines like Show Magazine, Eye Candy, and King Magazine.

Who Is Bernice Burgos?

Bernice Burgos was born on April 17, 1980, in the Bronx, New York City, United States. She spent most of her early days in the tri-state area of commuter suburbs and communities, between New York City and New Jersey. Due to her unplanned pregnancy, she was forced to drop out of school and welcomed her first daughter named Ashley, at the age of 15.

After Burgos gave birth to her daughter, her grandmother kicked her out and then started living with her then boyfriend's mother's home.

Burgos holds an American nationality and belongs to the mixed ethnical background.

Bernice Burgos is one of the successful Instagram models with attractive looks and curvaceous body. She has amassed a mega social media following on her Instagram account with more than 4.3 million followers, as of September 2018.

Burgos initiated working at bar tables in the Bronx. Along with that, she also started her modeling career. Due to her outgoing personality as well as sexy appearance, the model grabbed huge attention and featured in numerous popular music videos, including Rick Ross’ music video for Diced Pineapples and Southern Hospitality.

Get em’ B, ignore the hate

Burgos subsequently appeared in several television commercials. She has also been featured in a number of well-known magazines like Show Magazine, Eye Candy, and King Magazine as well. She also starred on MTV's Wild 'N Out.

Bernice Burgos has earned a decent amount of money from her career, but, the exact amount of her net worth is yet to be revealed. As per some online sources, it is speculated to be more than $2 million.

On the other hand, Burgos also owns her own sleepwear line called Bold & Beautiful where her clothing items range from the $50 -$60.

Moreover, the model runs a self-titled YouTube Channel. It has boasted over 42.8k subscribers. It is likewise a major driving force in her journey to $million.

Who Is Bernice Burgos' Husband?

Bernice Burgo is not married, but, is a mother of two daughters. She gave birth to her first daughter, named Ashley Burgos at the age of 15. She welcomed her second, daughter, Sarai Burgos in March 2018. Ashley is also a model.

The rumors of her pregnancy with her second daughter started to spread in the year 2017. The name of the biological fathers of her two daughters is yet to be revealed.

In 2012, Burgo was reportedly dating the Canadian emcee, Drake. Although the rumor was never confirmed the two continued to see each other until 2015.

She was later allegedly involved in a relationship with Marion Knight, a music executive, founder, and CEO of Kapital Records and Death Row Records.

Bernice Burgos is also rumored to be dating American hip-hop artist Clifford Joseph Harris aka T.I. As per the reports, they started their affair in late 2016 and are still together. The alleged couple has been spotted at many places mostly in restaurants and nightclubs. They also went to Las Vegas and Atlanta for vacation.

Tameka Cottle "Tiny" even accused Burgos of wrecking her marriage. In her defense, the model said that they became friends after T.I filed for divorce so she cannot be blamed for their broken marriage.

On December 14, 2010, Burgos was arrested by Palisades Park Police Department and the Bergen County Prosecutors Office Sex Crimes and Child Abuse Unit for attacking a 14-year-old girl. She was charged with a second-degree crime; endangering the welfare of a child.

Here is a video where Burgos is taking her dating rumors.