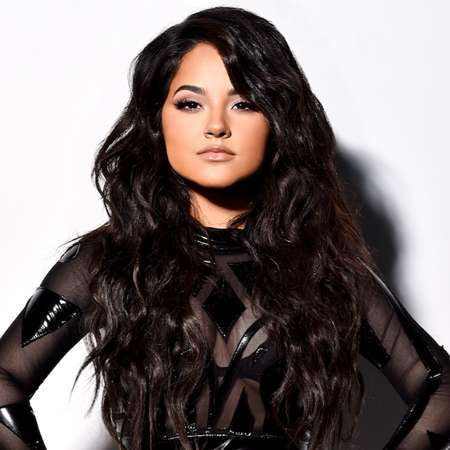 Rebecca Marie Gomez, better known as Becky G, is an American singer and actress. She first came into limelight in 2011 when she began posting videos of herself covering popular songs online. She portrayed the Yellow Ranger, Trin, in the 2017 film Power Rangers.

Becky G is a singer, rapper, actress and a songwriter whose unique singing style is an integration of Latin pop as well as pop-rap genres. She rose to fame after posting several videos of herself performing remixes of songs on YouTube.

Rebecca Gomez was born as Rebecca Marie Gomez on March 2, 1997, in Inglewood, California. After her family suffered from financial struggles, Rebecca began working part-time jobs in commercials and in voice-overs.

She rose to fame after releasing videos f herself and releasing it through YouTube. She used her own lyrics on hit hip-hop and rap songs and earned fame. She has also appeared in several magazines including Covergirl.

She has released the covers of songs like Take Care, Straight Up, Novacane; This is Why I’m Hot, Boyfriend etc. After being spotted by Dr.Luke after her cover of songs of Kanye West and Jay-Z's Otis, she was signed into to the label Kemosabe Records.

She was then featured in singles like Wish U Were Here, Oath, Die and Young. She also sang a song for Hotel Transylvania.

She released her first single from her debut album entitled Shower in April 2014. The song peaked at number 16 and Can’t Stop Dancin, another single was released in November of the same year.

This song also peaked at number 88. She announced in May 2015, she and J Balvin will be touring America. She has released several other singles since. She acted as the yellow ranger, Trini, in the 2017 Power Rangers film.

Becky G is an unmarried woman. She is currently dating soccer player Sebastian Lletget. The couple has been dating since June 2016. The duo appears together in several events and functions.

Her current boyfriend, Sebastian Francisco Lletget, is an attacking midfielder of LA Galaxy in Major League Soccer. He is also the player of United States national soccer team.

Previously, she was in an on-off relationship with singer Austin Mahone for few years. Austin and Becky began their dating after they recorded the single Lovin So Hard together.

They confirmed their affair back in 2014 and were rumored to have broken off their relationship a few months later in August 2015. Their constants travel and lesser time for each other have been cited to be the reasons.

Becky G's current net worth is $3 million. She garners a huge amount of money from her singing career. Her new movie Power Rangers collected $142 million worldwide.

Becky's YouTube channel has over 30 million video views. Given that she’s joined Google’s Partnership Program, she would have earned at least $11K so far, from ad revenue alone.

She has a pretty face, a sexy body and a height of 5 feet.