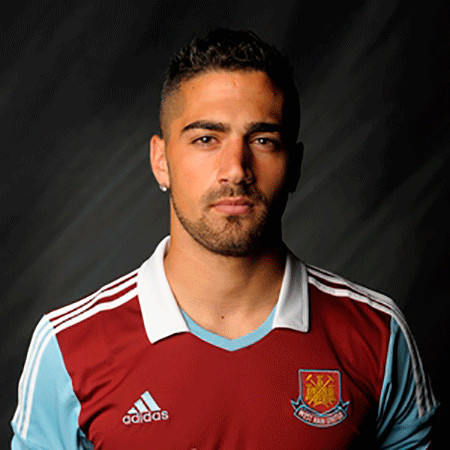 Sebastian Francisco Lletget, an American soccer player, is the current midfielder for LA Galaxy in Major League Soccer. He joined the LA Galaxy in 2015. He is also the national team of the United States soccer team. Lletget spent five seasons at EPL club West Ham United from 2010-2015.

Lletget's nationality is American and his ethnicity is Latin American. Lletget's star sign is Virgo. Being interested in football, Sebastian Lletget played for Sporting Santa Clara of Silicon Valley during his early life.

Sebastian Lletgetgot a chance to play with the United States under-17 residency program, which also helped him boost his career. In he was spotted him playing by Santa Clara by scouts from the West Ham United International Academy and he moved to England.

In 2010, Sebastian Lletget signed his professional contract with West Ham which was also his first career contract. Though his career was not much in the English club, he made his official debut on January 5, 2014, against Nottingham Forest at The City Ground.

Besides this, he appeared as an unused substitute for four Premier League games for the 2012-13 seasons. Lletget's career progress was slow and later he moved to Major League Soccer.

Sebastian Lletget joined LA Galaxy in May 2015. Lletget made his first club appearance on May 17, 2015, against Orlando City SC. His first goal for the LA Galaxy team was against Columbus Crew.

In a U.S. Open Cup match against PSA Elite, Lletget scored and his club had an excellent victory of 6-1. With his fantastic scoring form of the fourth match in a row, the club got a 5-0 victory over Portland Timbers.

Sebastian Lletget has been best in his club, where he scored a late brace in the U.S. Open Cup which helped the Galaxy move to the semi-finals after defeating Seattle Sounders.

Talking about his international football career, he has played from U. S. national team in several categories of Under 17, Under 19, and Under 23.

Lletget is the current midfielder of the United States national team. In June 2017, national coach Bruce Arena called him for the first time in the national squad.

On January 29, 2017, he made his international debut from the senior team against Serbia. He scored his first international goal against Honduras on March 24, 2017, at the 2018 FIFA World Cup qualification. In the same match, he suffered a Lisfranc injury and was out from the team for four to six months after undergone surgery.

This relation was confirmed by Becky after she posted the photo of them kissing on the field. Becky has also made a statement with the caption Real one. The couple has been still together and sharing a wonderful relationship.

Net Worth, Contract, And Salary

The 26-year-old soccer player Sebastian Lletget's current net worth is $1 million. His annual salary is $242K including $230K and $12 million as compensation. In 2016, his salary was $115K.  His major source of income is his club's salary and an endorsement deal with many well-known brands.

On the other hand, his longtime girlfriend Becky G has a net worth of around $3 million.